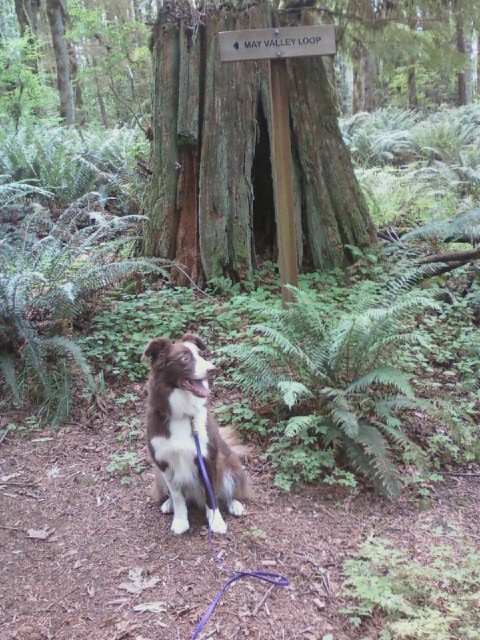 “Mom got her lazy ass out of bed early and it wasn’t even an agility day!”

Got up early this morning to go have breakfast at the Senior Center with my clients, “Jack Lemmon” and “Walter Matthau” and decided to take Brady with me. I figured Brady might not be as overwhelmed with the attention from the old guys if it was just him and I was right. He still didn’t appreciate their curiosity and vast admiration of 1) his incredible peeing skills, 2) his fluffy pantaloons, and 3) his athletic ease of movement, but he was tolerant. There was a fair amount of coming to tuck his head between my legs, which is apparently to my dogs a safe place.

All my dogs seek out safety between my legs at times and when there’s some disagreement or someone doesn’t like what someone else did or said, then they seek solace with their heads tucked in tight between my legs. I’ve learned that a  little bit of a leg squeeze is also comforting at times like this, as is a gentle murmuring of comfort and understanding about the wrongs in life. It reminds me of when my youngest brother, Saul, was little and he’d literally hide underneath my mom’s skirts or hide behind her legs.

I get it. Sometimes it’s just hard to deal.

But Brady’s morning turned around because I then took him for a hike.

That was the plan all along. It’s been a while since it was just me and Brady doing something together and exploring the woods is one of Brady’s most favorite things in life.

But I wasn’t sure where I wanted to go until I got to where I was.

I decided to hike this trail that I’d gone on partially with a friend early in the week. I was curious about where it went and we didn’t get too far the other day. The area is one also, that despite its close proximity to me, I haven’t actually hiked that much – at least from this particular trailhead.

Therefore, feeling adventurous, and with no pressing time constraints, I decided it was Brady Time.

And so we wandered. First, I explored some smaller “interpretive” trails just off the parking lot merely out of curiosity. Then off we went on the actual hike. Now, having made a last minute decision – I’d been contemplating three different spots for Brady Time and ultimately chose the closer one – I wasn’t clear on distance, elevation, trail conditions, or trail features. Kids, don’t do this at home. One should always be well prepared when dealing with nature. Me though? I just figured we’d wander until we were tired.

It was peaceful and, despite being the Saturday of a long holiday weekend, the trail was nearly devoid of other people. We did encounter two separate men walking their dogs, but both were quiet and seemingly also in for the solitude and peace of the woods. This is what happens when you get your ass out of bed early. Hardly anyone else hiking except for old guys.

Although I didn’t know it, the hike was six miles. Plus we added on a bit with the exploration of the lower side trails. Despite not knowing the distance at the time, my legs are a fairly good judge of distance and I figured we’d done between five to six miles when we returned to the car.

The fantastic thing about a meandering, woodsy hike like this is the incredible peace one feels when done. And I wasn’t the only one. Brady hopped into his crate in the back of The Living Room on Wheels and plopped down, face relaxed and happy. As we drove out of the parking lot, my body felt flooded with relaxation chemicals and a sense of peace and well-being.

I stopped for a coffee at a local stand on the way toward home and sat enveloped in the comfort of The LRoW. Even the line for gas at Costco couldn’t ruin the complete sense of peace and relaxation I felt.

Brady is now curled up in is dog bed, also relaxed and peaceful. I can’t imagine all the things he’s remembering about what he sniffed, the squirrels he saw, the sounds he heard and I hope, the peace he felt having me solely to himself for a while today.

“Mama, you took your pants to interesting places! I smell woods!”

Of course we did have to deal with the other dogs when we got home. Camm, who really hasn’t gone much of anywhere since she broke her foot, was entranced by the smells on my pants. It makes me sad that she had to console herself by laying next to the laundry basket and stuffing her nose into my pants leg. However, soon enough it’ll be Cammi Time again.

← Sexy Senior
Adulting. Or Not →