November. The month when it feels like it’s 4:30 pm all the time.

For example. I was sitting in front of my computer at 10:30 am this morning drinking coffee and I glanced outside and thought to myself, it looks like it’s 4:30 already. Then later today, I had just finished vacuuming the house, glanced at the clock thinking that surely it must by 4:30, and it was 2 pm.

When I was a kid I used to bemoan the fact that I was born in November. What a dreary month, no matter where you live. Except for South Florida. That’s pretty much the nicest month in South Florida. I used to wish I was a June baby or more exciting, July or August. But then I got a bit older and had friends born in those months. Not really all that great either. Kids born in those months either end up going to school really young or a year later than everyone else. Also, everyone misses their birthdays and not that many, at least in my circle, opted for cool pool/birthday parties. I did go to one once. Wasn’t really all that fun. No one else I knew had pools. The fact that it was Northern New England probably played a factor in that.

While today I’m opting for staying in and hibernating of sorts, yesterday I braved the rain and the blustery winds and took the dogs out.

This was even after the dogs had shaken a considerable amount of water out of their coats. I know it’s bad, even for the dogs, when after a couple of hours of splashing in puddles and running through streams with grandiose plans to become rivers, they look up at me blinking the steadily growing rain from their eyes and eagerly gather at the car, vying to become the first to jump in.

Still, once I’m actually out in it, I’m fine. I have rain gear and once you’re wet, it’s not like you can really get any wetter. Plus, it’s only in November here in the Pacific Northwest that we really see anything resembling actual rain. Most of the time it’s just a soaking mist or steady drizzle in the winter months. I also like to bear in mind that it could be snow.

November is also the time of year when all my fun agility travels end.

A lot of naps. A lot of sleep and late mornings.

I’ve told myself I’m not doing any real agility in November and December. I am signing up to do a couple of fun runs and I did enter a UKI trial in late December, but all are purely for the purpose of training. I figure I’ll use the hyped up atmosphere to work with Brady and Camm on stuff. Mainly contact zone criteria. I’ll let Youke continue to nap.

I usually enter a trial over Thanksgiving weekend and this will be the first year since 2008 that I haven’t entered it. All bets are off as to whether I break down and do some day-of runs, but since I launched my new business and hope for some holiday bookings, and the fact that I’ve not been gainfully employed since May, my less-instant gratification self has taken over.

So, when me and the dogs aren’t napping, we’re out exploring. Got Youke and Camm out on an excellent adventure earlier in the week.

Went up one of my favorite trails and coincidentally, the first trail Youke ever hiked. Youke is my best hiking partner. He is steady, well-tempered in that he’s friendly, but not too friendly, doesn’t get too far ahead, isn’t really interested in chasing critters and he listens well. Camm would be a really good hiking partner if 1) she wasn’t so freaked out about fast-moving people (i.e. trail runners), 2) appreciated strangers who are dying to pet her because she’s cute, and 3) she liked kids. For those reasons, Camm is watched very closely. I’ve also discovered that simply handing her A Ball to carry around works well. It sort of like the device that the fictional Hannibal Lecter had stuffed into his face, only her ball is voluntary and is not strapped on. Like Hannibal Lecter’s safety device, A Ball prevents unwarranted nipping activity.

Camm would prefer to be the only one with A Ball.

For a few days, the Chariot to Adventure was out of commission and unable to whisk JaYoBaCa off to their preferred fun in the woods and on trails.

It was bound to happen eventually and I consider myself quite fortunate that it took this long to happen. I came back from a short romp where I took the dogs to go field mice hunting to find the passenger side window of my jeep smashed. Several creative swear words later, I discovered that I had a lot to be grateful for. Despite some obvious rummaging, my wallet was not taken.

I’m really not stupid enough to leave my wallet in my car, especially unlocked, but on this occasion it was. Usually I just carry what I need in my cargo pants. Hence the reason I usually wear cargo pants.

But on Sunday I brought my wallet because I was going someplace afterward and stuffed it in the center console of my vehicle and promptly forgot to lock it. I think the only reason it wasn’t taken is that either the dickwad was discouraged by all the dog paraphernalia in my jeep or, and far more likely, he spotted the dogs and we unknowingly interrupted him. Also, I’m guessing that despite what Youke may think, used orange Chuck-it balls don’t fetch a premium on the black market.

A day and half of driving around without a window though made the inside of the jeep smell fresher.

Speaking of fresh, I purchased a new vacuum. My metamorphosis into my mother is now nearly complete.

For a more defined understanding of this, please know that at my mother’s funeral service my siblings and I brought her favorite Miele vacuum and posed it alongside her urn. The vacuum, along with the wreaths of flowers, made a lovely focal point.

I too own a Miele, but 17 years of trying to pull dog and cat hair from wall-to-wall carpeting at two different houses in two different states with their own special brands of dirt and fauna has taken its toll. The Miele is dying a loud, croaking, sputtering death.

The good news is that my new Shark vacuum is a freaking bad-ass beast.

I assembled it today, carefully matching the alphabet diagrams with the numbered diagrams and utilizing a little good old-fashioned puzzle-solving intuition when the diagrams started jumbling together in my brain. One would think that reading agility course maps would prepare you for this, but really, not so much.

Unbeknownst to me, besides the four dogs and one cat that I live with, I was apparently also living with another critter. This critter was large and hairy and able to flatten itself to all the walking surfaces of my residence. It was also really scary.

Because really scared was how I felt when I dumped it into the trash can. Also, really awed. Poor ailing Miele hadn’t been able to contend with this furry thing for some time from the size of it.

I’d show you a picture, but then I’d have to censor it. It’s best that I leave it up to your imagination. 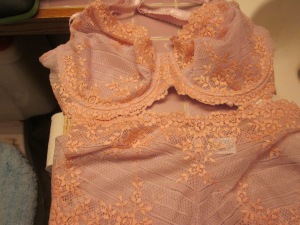 However, I am showing you this.

I recently did some purging and found these dainty, and matching, things. Instead of tossing them into bags for Goodwill, I looked them over and decided to keep them. Perhaps for a special occasion.

A special occasion has not recently returned my call, so since I decided earlier today I was not venturing any further than up and down my stairs, I thought it’d be nice to wear a matching and pretty bra and panty set. Sometimes, I just feel it’d be nice to not wear a sports bra and throw on cargo pants and a hoody. Plus, it’s dreary and depressing today and I thought wearing these would make me feel special.

They did not. What they did do was make me feel slightly itchy – all that lace, and very unsupported. I also didn’t really feel like me. Apparently me is not delicate underthings any longer, and is more like architectural and functional.

I realized that’s just fine with me. It’s good to know oneself and to like that person. Just as I eventually became okay with being born in the dreariest month of the year, I am also good with being a person who doesn’t really like lacy undergarments, is both fascinated and satisfied with a powerful vacuum cleaner and doesn’t mind getting wet as long as pups frolicking in puddles is involved.

← Not So Crazy, Marker Dogs and Other Deep Thoughts
This is Your Captain Speaking →