Flying over the A-Frame

Rhys started his agility training in early 2018 and I’ve dabbled a little here and there with him in agility since late in 2018.

I stayed true to my promise to myself, and to him, to not start any real agility training until he was a year old. I firmly believe in letting puppies be puppies and although we did do formal and informal training and did some classes, I stayed away from agility equipment and formal handling. Mainly, I spent that first year helping him be the best dog he could be for my lifestyle and exposing him to his future life. Agility is ultimately a few minutes of competition. Life is everything else.

Rhys and I started agility classes together in January 2018. I decided I wanted to take a slow and steady path. I was in no hurry and had three other perfectly capable dogs to take to agility trials and compete. I also had specific goals with those dogs I was targeting and taking Rhys to trials and trying to compete with him was a distraction.

Our training progressed. Not quite as slowly and steadily as I had anticipated, but more like in fasts bursts of understanding and in bouts of frustration. That latter was more often me, but I know he’s been frustrated as well.

Despite a promising first trial, I knew Rhys was not ready for prime time and he confirmed it when I entered him in a few runs at a trial in early 2019.

I continued to ask him the occasional question by taking him to a trial and entering a few runs here and there. The answer during much of 2019 was usually a very resounding not yet ready.

There were moments of utter brilliance and glimpses of a fantastic athlete, but I had to temper my enthusiasm. I learned from my experience with Youke that starting too young and pushing too hard is not good. I also was realistic based upon my experience with my other dogs to not set expectations. Thus, I went into 2019 with no set goals and absolutely no expectations for Rhys.

We had a few really fantastic runs in competition, and we had some absolute disasters. In fact, we had both at a trial in September. It was that trial, at which I was also the trial secretary and was running my other three dogs, that I came to the conclusion that Rhys needed my full, utmost and undivided attention if we were to actually compete.

I love running multiple dogs. I love the high, I love the adrenaline and I love figuring out what each needs from me, even when running the same course. However, I’ve competed with the three older dogs for several years now and they are known entities. Youke and Brady are tried and true teammates. The fact that I feel so comfortable running Youke and Brady was unfathomable a few years ago, yet here we are.

Now that Youke and Brady are both double-digit dogs in terms of age, I must face their eventual retirement from agility. Brady will likely be competing for a while. He loves the sport. But I am the human with the allegedly larger brain, so I must be smart about how often he runs. His days of doing a complete trial weekend are over, despite what he’d like. Youke will likely formally retire sometime in 2020. He’s achieved everything I’ve dreamed, and beyond. He likes to play agility still sometimes, but at nearly 12 years old, he ready to move to something else. I’ve decided that I’ll see how he feels about truffle hunting.

Therefore, I’m going into the year with the resolve to focus on Camm and on Rhys. 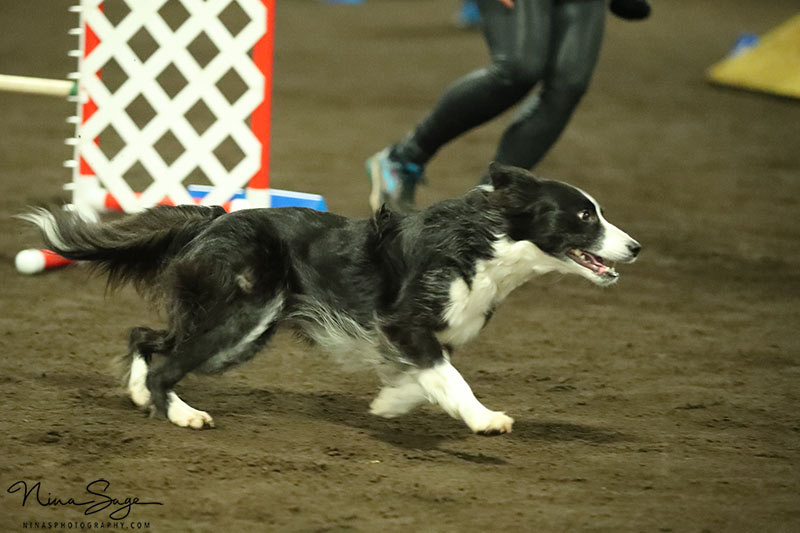 Camm, December 2019 CPE. Photo by Nina Sage. Also, not real leather pants. Although that should totally be a thing.

I entered Camm for one day by herself at a CPE trial in late December put on by my club. I discovered something rather remarkable. To me anyway. She enjoyed having my undivided attention and I was more relaxed running just her.

We are still in the experimental stage on this, so I am not entirely sure my relaxed attitude was completely due to running just one dog. I only entered a few runs each day and I had the weekend free for agility with almost no other obligations after an extremely busy December, especially around the last two weeks with the holidays for work.

One of the reasons I like running multiple dogs is that I get incredibly bored at agility trials running just one dog as there’s so much down time. But during that weekend it was mild and sunny out and Camm and I had plenty of time for some Ball and to walk around. It was a great way to bond and spend some one-on-one time with my sassy girl.

Again, an experiment, but Camm was nearly perfect all weekend.

On Sunday of that weekend, I entered Rhys.

Rhys only did four runs that day. As usual, I trained in the ring for two of them.

I cannot express enough how much I love that virtually all of the various agility organizations have loosened up and now allow some form of training in the ring. The experience of being allowed to use a toy or to repeat a sequence is invaluable with a young, inexperienced dog, especially for criteria performance and confidence.

I’d been mixing up training in the ring with doing runs for real in all of 2019 with Rhys (and sometimes for the older dogs too). Since I had no goals or expectations, why not take advantage of these opportunities? I believe that the more fun and confidence I can instill early on in competition, the better. Hopefully, I have years ahead to set goals and garner achievements. And if I don’t? We’ll still have had a lot of fun playing. And they tell me agility is supposed to be a fun thing to do with your dog.

I ran two runs “for real” with Rhys that day. He obtained a qualifying score in one with a lovely smooth run. He did not qualify in the other, but that was because I was so blown away by his performance during the run that by the end that I neglected to actually handle the last line of jumps.

I’m still not going to set any goals for Rhys in agility in 2020, but he told me he is ready for competition.