Poopy Butt and Other Tails

Youke had his 11th birthday this past weekend. We celebrated with a hike, a nap, a little bit of Ball and yummy food, not necessarily in that order. 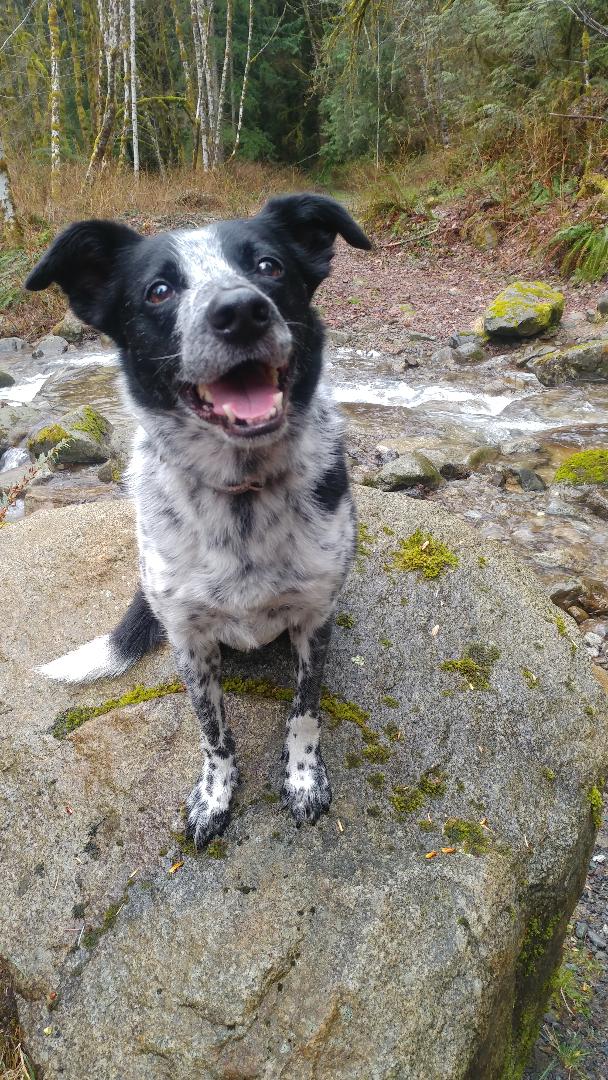 The happiest 11 year old dog on the planet

Interestingly, Youke and I share a love for many of the same things – mostly naps, hiking and yummy food. I do not share his Ball obsession. I especially do not care for slobbery Balls found on the muddy edges of a trial, but Youke thought it was a wonderful treasure, therefore I indulged him on our hike by tossing his newfound toy a few times. But he lost it to first Rhys, who carried it around for almost a mile before forgetting it for something critter-related, and finally to Brady. Brady went off into the woods with it for some private squeaky time, but emerged finally with it dissected in half and with the squeaker mysteriously missing. Ball was therefore ruined and No Fun.

I had no work obligations this past weekend and no specific plans for the day but figured I’d spend it Doing All the Things. Approximately 90 minutes after I’d gotten out of bed though, I realized I needed a nap. I justified this in part by acknowledging that Youke, the Birthday Dog, also enjoys naps. What better way to celebrate All Things Youke by starting off with one of his favorite things? A nap with me and a big cuddle session. That turned out to be exhausting, so after 90 minutes of napping, followed by 20 minutes of eating, we decided to nap again. But first, I gave the dogs some marrow bones to gnaw on for a while.

Somewhere around 3:30 pm, I realized that Youke probably didn’t envision his entire 11th birthday celebration as a long nap, so off we went to commence the hiking portion of the day. 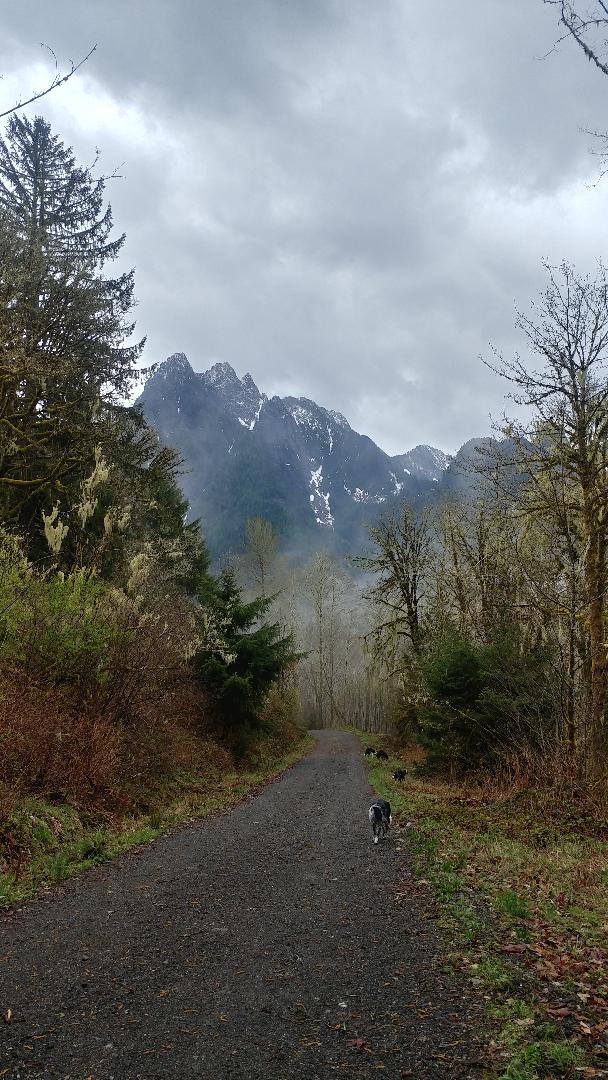 Of course, every birthday should include a special feast. While I declined to share in the sardine portion of the birthday feast, we did all share some mini cupcakes, which are a birthday tradition for Youke.

All that celebrating and feasting proved a bit much for some dogs’ tummies.

Of course, Youke and Rhys, my two smooth coats, were completely unaffected.

My two rough coats with floofy tails, Camm and Brady, however, experienced a bit of diarrhea.

Poor Brady did something to his tail a week ago and has been suffering limp tail syndrome, also known as swimmers tail. Youke experienced this many years ago, but from actual swimming. Brady had not been swimming. Since dogs can experience this from overuse of the tail, my theory is that Brady sprained his tail muscles while playing Ball the previous weekend. Thus, no Ball for my tribe for over a week now. Well, with the exception of the yucky abandoned Ball Youke found, but very little throwing and catching was involved, and even then, only with Youke.

I first noticed that Brady’s tail was hanging straight down and he wasn’t wagging it. Given that Brady’s tail is a Thing of Glory and is often carried aloft like a flag, this was very sad to see. In Brady’s case, it seems his tail was actually painful. He yelped when on our hike I pulled some brambles and sticks from it. Despite the pain and inability to use his tail much, he otherwise ran and acted normally. And after our hike he seemed to have loosened up enough so that by the next day he had a slight curl to it again.

Luckily, he was able to lift it enough by the time of the upset tummy incident after too much partying to not sully himself. 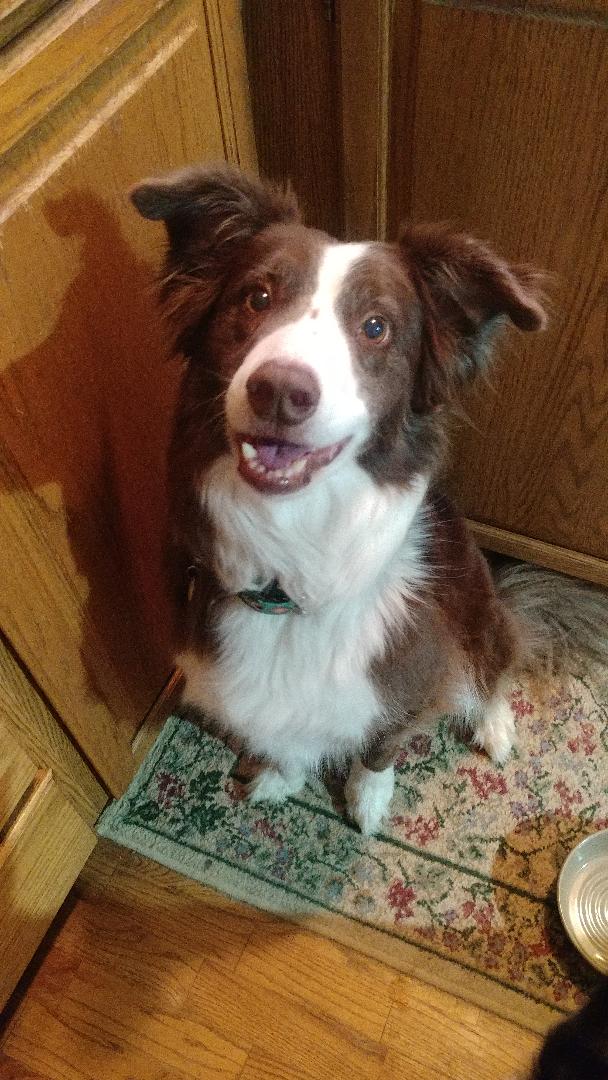 Camm was a different story.

After racing outside to relieve herself late Sunday morning, I noticed a streak of unpleasantness in Camm’s pantaloons.

“Uh-oh Camm. You have Poopy-Butt.”

She turned around to look at me, surprised.

“It’s okay. Everyone gets Poopy-Butt now and then. Nothing to be embarrassed about. But you know what happens when you get Poopy-Butt!”

Camm knows because a few weeks after she came to live with me several years ago, she had a series of unfortunate tummy events, resulting in several episodes of diarrhea. It was then that the phrase, Poopy-Butt was born. It was also then that Camm learned what happens when you have a Poopy-Butt.

Dogs with Poopy-Butt get hauled upstairs into the tub and get a bath.

At first, this was a completely shocking event for Camm. So shocking, so sudden, that she really didn’t have time to protest too much. On the second trip into the tub, the very same day, she tried to register her dismay and indignation at this unceremonious picking up and being plunged into a tubful of water and having her skinny ass hosed down.

“Camm! This is happening and you are going to have to deal. This is what happens when you have Poopy-Butt! You get a bath!.”

Camm is an especially brilliant dog who processes information rapidly.

By the third episode leading to the necessity of a trip into the tub, she was leading me upstairs, standing by my side while I ran the water and jumping into the tub to get her hind end lathered up with whatever fragrant shampoo I had on hand that hadn’t cost me $15 for color-treated hair.

So, when she had an unfortunate stray bit of poop clinging to her gorgeous little rear end this weekend, and I exclaimed that she had Poopy-Butt, she knew exactly what to do.

I opened the door into the house, she ran upstairs and stepped into the bathroom. Since it’s been a while since she’s had Poopy-Butt, I did have to lift her into the tub, but she was perfectly accommodating as I soaped her up with some lovely clove shampoo made especially to enhance brunette coloring and sprayed her down with the shower hose. She was perfectly still as I wrapped her rear end up in a freshly laundered towel and rubbed her down before releasing her to play with her amazed and shocked little brother who monitored the entire episode from the doorway of the bathroom. The same little brother who writhes and slides in the tub, while making growly noises when he requires bathing after rolling in something unfortunately fragrant and putrid.

Camm had one more episode of loose poop later on Sunday. I asked her if she was a Poopy-Butt again. Her eyes widened and she looked at me, then started heading toward the stairs to go into the bathroom. I asked her to come toward me so I could check. When she did, I lifted her little rear end up and checked.

Camm’s eyes lit up and she barked her sassy bark and then went and rolled her brother over. Because she could.

← A Touch of Grey
Pickles and Dogs on a Saturday Night →