It was a skort actually this past weekend, so I’m sure that makes it okay.

Here’s the thing. I’m nearing my mid-50s, my legs are fairly toned from lots of dog-walking and hiking, it was nearly 90 degrees this weekend and I don’t give a fuck anymore.

But I do apologize to anyone I might have flashed this weekend. There’s a lot of bending over in agility trials.

My agility mojo continues to flutter like a lackluster flame. I’ve found it pretty hard to give a fuck about agility competition for most of the summer. This is probably why Youke and Brady are both close to a championship title in one of the venues we compete in, but we haven’t received qualifying runs in the one event we need to get a few more qualifying scores in. Ordinarily I’d say that I’m trying too hard, but really I’m not trying hard enough.

I’ll arrive on the agility field or the agility arena and, although I start out excited, I get there and already don’t care or as the day goes on I find myself caring less. The heat has a way of doing that to me.

Youke has made it very clear since CPE Nationals in May, where it was 90+ degrees and hit 100 degrees one day, that he does not give a fuck about agility in the summer. Cruelly, I keep making him try to care by entering him in only one or two runs. Youke has declared that is far too many. Yet Youke has also declared that we need to play Ball and go hiking no matter how high the mercury climbs. Because running fast, as long as it doesn’t involve some stupid pre-ordained obstacle course, is awesome.

Brady and Camm just wish their Human would run a lot better.

Running for me has been super hard, especially agility outdoors on grass, due to a gimpy foot that I’m pretty sure actually stems from a sciatica issue. Allow me to translate that a little better. I’m nearing my mid-50s and stuff that I’ve taken for granted my entire life up until now is breaking down.

I was trial secretary for an agility show that my agility club puts on around Labor Day each year this past weekend. Somehow, I thought it would be a good idea to enter a lot of runs with Youke, Brady and Camm.

It wasn’t actually a bad idea. Unlike when I’m a trial chair, I find it fairly easy to do my job as trial secretary and still run my dogs. Unfortunately, there’s also a certain amount of brainpower involved in running agility. I used most of this brainpower on trial secretary duties and not so much on memorizing courses.

So between not remembering exactly how a course was supposed to be run, not remembering what my handling plan was and not being able to run into certain positions fast enough, I was a bit of a hot mess.

It probably doesn’t help that in addition to the three competition dogs, I also had an eight-month old puppy to think about.

In reality, all four dogs were wonderful. It was hot and uncomfortable, their Human was occupied most of the time, they were often very bored and the venue didn’t have a place for them to really run and stretch out their legs.

Despite this, they were even-tempered, forgiving and sweet. Rhys made a new friend close to his age, played with other friends, explored the park with his own tribe and saw many of his people friends, as well as made new people friends.

I’m having a really hard time calling him a naughty puppy lately. I’m pretty sure an eight-month old dog isn’t supposed to be this wonderful.

As far as agility weekends goes, it was a nice one in terms of the location, the relaxed vibe and the people. In terms of competition and how my dogs fared, it wasn’t super great.

Brady took a giant nosedive into the grass on Saturday morning by slipping on wet grass. Ironically, we set the start time at 9 am to avoid dew in the grass for just that reason. There was still dew in the grass. It was a Jumpers course and he just couldn’t collect himself or adjust his striding. Of course this was completely my fault and he let me know it. He could not forgive me about it for the entire day. He also could not forgive me for bad handling or my gimpy foot. Things were better on Sunday, but with the exception of one run, I had handling bobbles.

Youke was just hot and not into doing the agility thing. He did humour me in his first run of Saturday by running a steady and sane pace and surprisingly qualifying in Jumpers whereas Brady and Camm did not because they couldn’t collect well enough.

As if often the case, the last run of the weekend was Tunnelers.

I love Tunnelers. Mostly I love it because my dogs love it. It is often an opportunity for full-out, balls-to-the-walls running.

This past weekend’s trial was a fairly small one. Brady was one of two or three dogs in his height class all weekend and Youke and Camm both run in the same height class and just below Brady. As is often the case at small trials when I run all three dogs in the same class, there is very little time to breathe between running a dog, running to get the next dog and then running another dog.

Sunday’s Tunnelers course had several tricky off-course options, as well as some opportunities to use some distance if that was in your tool kit. I walked the course and quickly devised a handling plan.

I ran to get Brady and since there was only a dog or two between him and Youke, I grabbed Youke too. I asked someone to hold Youke while I stepped into the ring with Brady, but not before cautioning them that Youke would probably start screaming.

Youke is ordinarily a very quiet dog. That is, until one of his family members is running agility in front of him.

Brady was the first dog on the line to run the course. I stood at the start line with him, softly petting the top of his head and surveyed the course quickly again. “I’m gonna run it like I stole it,” I thought to myself. I could feel my energy level rising. Brady felt it too. I could see that as we briefly connected once I got out to my start position and gave him his release cue.

Suddenly, I cared about agility. My agility mojo fairly screamed as my adrenaline level revved into place.

It was a screaming fast and nearly flawless run. Brady did briefly woof at one cue that he deemed was a bit late, but it was a minor singular woof, not a bark per se, and his silence on a run is the best performance gauge. When we connected again at the end of the run, we mentally sent each other a high-five.

I ran back to the start to hand off Brady and to get Youke, who by then was pumped up from knowing I’d just run Brady. It helped that his half-brother, who is also a fast dog, was the dog right in front of Youke. Suddenly, Youke’s agility mojo was also back.

After a great run with Youke, I ran back to get Brady and ran back with both boys to where I had crated Camm to switch them out and grab her.

By this time I was the one higher than a kite. It’s possible I was higher than Camm. In fact, I know I was because she held her start line until I quickly gave her a release cue because I just wanted to get at that course and pummel it.

It was one of those runs where I felt like if you squinted your eyes just right, you’d seen the afterburn following Camm.

Suddenly, I could barely remember what happened in any of our previous runs. I just knew I’d run three perfect runs with three fast dogs and that it felt freaking fantastic.

And I did it in a very short skirt. 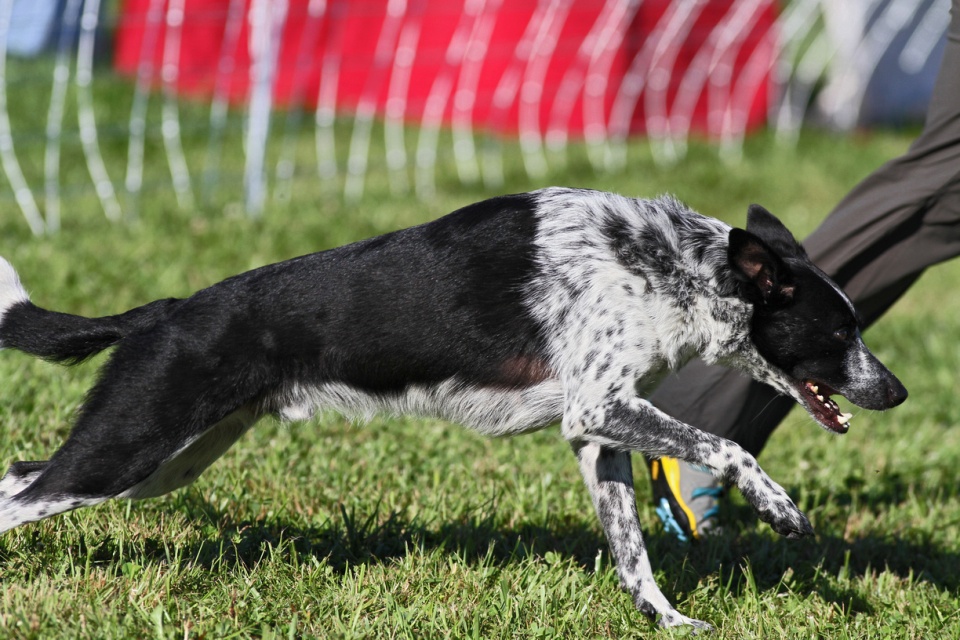 Youke at a summer trial a few years ago, when he enjoyed agility in the summer a bit more. Also before I risked running agility in anything other than long pants. Because of Brady. (See Itty Bitty Skort.)