The world as we know it might have ended.

And no, I’m not talking about me finally breaking down and getting a smart phone and giving up my beloved flip phone. Besides, that happened in May and despite a slight tremor in the Earth’s atmosphere, it appears we all survived fairly intact.

I’m talking about, of course, my puppy.

Rhys put himself to bed tonight.

Let me repeat that. Rhys put himself to bed.

And, as if he had to make a point of it, he did it twice.

This is the very same puppy that less than a month ago I had to persuade, sometimes with a few bits of kibble in my hand, sometimes with a leash attached to his collar, that it was time for bed, and that no we could not stay up playing until all hours of the night. 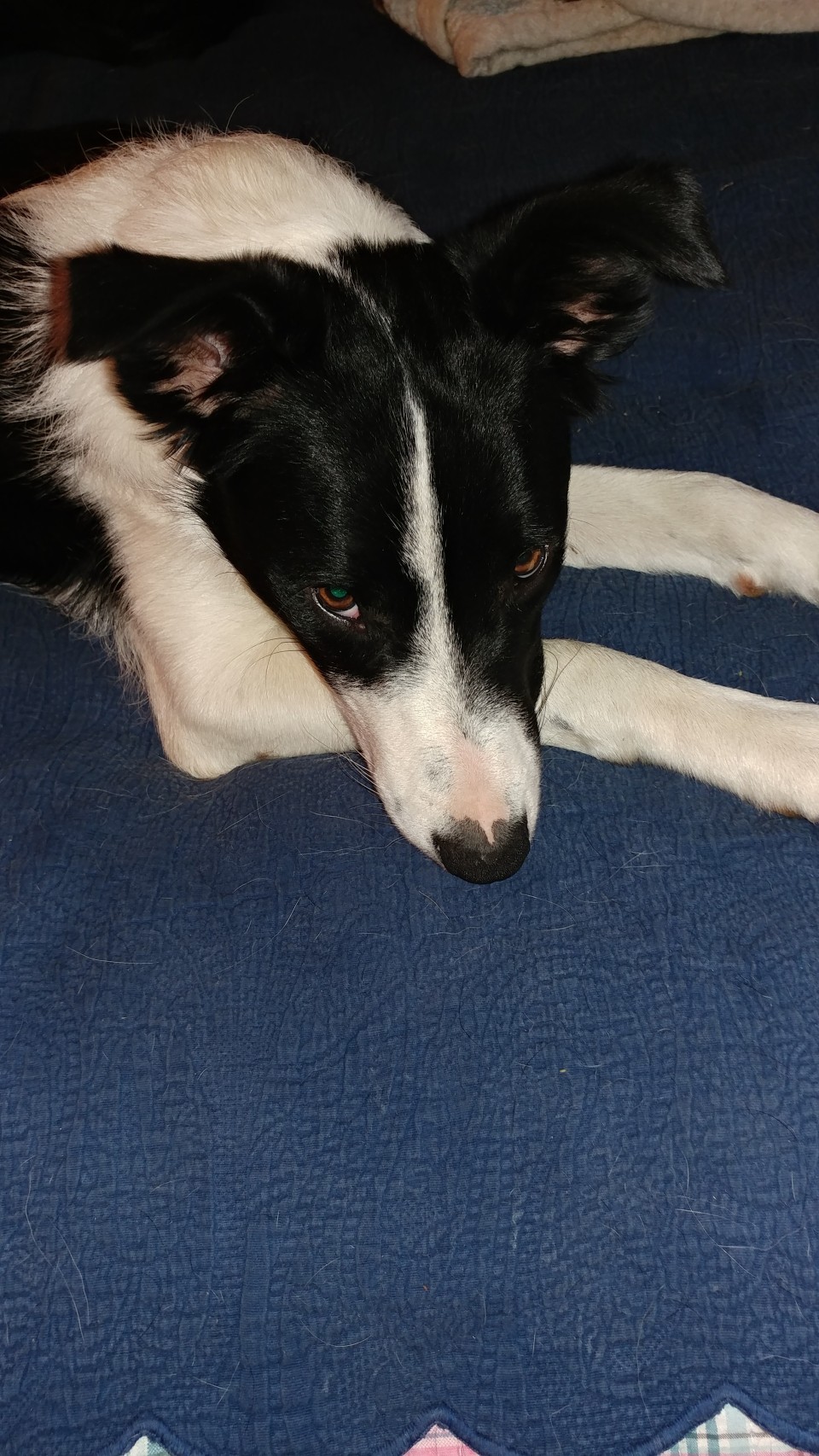 I has just finished folding a load of freshly laundered towels. I piled them into my arms and headed upstairs to place them in my linen closet. Brady was already upstairs as he’s still recovering from a full day of sensory input at an agility trial yesterday. Youke had just gone upstairs as he had a full tummy from dinner and had seen that I wasn’t sharing the salad I made myself for supper, nor the apricot and blackberry cobbler I had for dessert. Camm and Rhys trailed up the stairs behind me. Nothing unusual in that as Camm follows my every footstep and Rhys is her shadow.

I placed the clean towels in the closet and went into the bedroom to retrieve the comforter that I had taken off the bed this morning when I changed the bedsheets. The comforter needed to go into the laundry. I have several light comforters that I rotate and launder on a regular basis. This is a necessity when you sleep with dogs.

I noticed that Rhys has flung himself up on top of the bed. As I busied myself around the bedroom, picking up a few things, I noticed that instead of watching me, he spread himself out his full length on top of the bed and that his eyes were at half mast. I went over and gently brushed his ruff and kissed the top of his head. His eyes opened, but he continued to lay there. I scooped up the comforter and headed back downstairs, curious as to what he would do. Camm followed me down the stairs. Rhys did not.

After loading the washing machine, I started back up the stairs and peeked back into the bedroom. Rhys was still on the bed. His eyes opened and he looked at me, but made no move to get down.

Wondrous, I headed into the office to chronicle this miraculous development.

Rhys wandered, er, staggered, into the office and looked at me.

Ah, I thought, it was simply too good to be true. I prepared for another round of bitey-face between him and Camm as I turned my head away to sift through some notes on my desk.

A couple of minutes later I realized it seemed extremely quiet and became aware that Rhys was no longer in the office. I peered around the corner to the bedroom. There he was, spread out full length on my bed again, Youke curled into a ball on his side of the bed.

Ever since he made the decision late in July that he is no longer sleeping in his crate at night,  Rhys has been experimenting with exactly where it is he is going to sleep. Like many decisions my dogs make, I’m on board with the basic decision and with a certain amount of experimentation, but I do set some perimeters. In Rhys’s bedtime decision case, I was on board with no more crate, but ruled that he did have to settle somewhere in the bedroom itself and could not have free reign of the house. This seemed fair to us both.

Rhys sleeps on the bed now.

One of the great benefits to this decision is that I no longer have to cajole him into coming upstairs for bedtime. Rhys now voluntarily comes upstairs, even on the nights when he’d rather stay up later. On those nights, he might linger downstairs for a little bit, playing with a toy or gnawing on an already clean bone, but I no longer call him or go get him. He thinks about it some and within minutes, he’s upstairs too.

Gotta love when it’s their own decision.

So, I, as the Human, have a small sliver of the bed, in the bedroom of the house that I pay the mortgage on, while Youke sleeps on his side of the bed, Camm sleeps across my feet, and Rhys sleeps diagonally between them and with the full length of his body – which at seven months is quite lengthy – pressed into me.

This actually would be an ideal and sweet set-up for the dark and cold rainy winter months. However, it is presently August. Presently, we are experiencing a bit of a heat wave here in the Pacific Northwest. This heat wave translates into temperatures in the high 80s and into the 90s. Days of that stuff, and even my normally temperate house becomes uncomfortably warm, especially the bedroom.

One would think that the dogs would prefer not to be touching my 98.6 degree body that I’m quite sure heats up even more at night. One would be wrong. Instead, I find myself enveloped by warm, heaving dog bodies that seem convinced that it is vitally important to keep me as close as is physically possible without actually laying on top of me.

Although, on second thought, a paw across my back or a head across my feet can’t really hurt.

If you can’t sprawl on your Human, just sprawl across a kitchen cupboard.