This is How We Ring In the New Year

How to end the year and start the new year? With an agility trial of course!

Really, did you expect anything different?

So by the skin of her pearly white teeth, got Camm qualified for CPE Nationals in May 2017 at this trial – the last freakin’ trial of the year and the last of the qualifying period. She was kind though and didn’t make me wait until December 31. We actually got that last Snooker Q (Q= qualifying score) on December 30. It wasn’t pretty and it was not a proud moment for me. There was a lot of shrieking involved on the part of the Human. Thankfully, neither of my agility instructors was there to witness this awful moment or I’m pretty sure they’d ask me to take my business, and shrieking, elsewhere.

“Louder is not clearer,” in the words of one of my instructors.

I’m lucky that Camm was so dismayed by my sudden transformation into a shrieking harridan that she forgot to scold or bite me and instead did the course as I , er, screamed.

I did get bitten that day though. Not by any of my dogs, a fact that seemed to perplex and surprise those that know me and my dogs when we do the agility thing when I posted this on Facebook. I was bitten by a potential client dog. The word potential being the operative descriptive here. However, before the bite occurred – when my back was turned and as I was headed out the door – so very not cool buddy! – I’d received just enough information to consider giving the dog another chance, and therefore did not immediately tell the human client, no freakin’ way am I walking that dog! I’ll admit, I did consider saying it though.

The dog in question has lived in three different places within the past year and his family only moved into the current house a month ago, and then left him at a boarding facility for two weeks during the recent holidays, where he was injured and had to receive stitches and wear the dreaded cone.  In fact, on Friday when I met him he was in the cone. So, I could see where maybe he was a little stressed out and I opted to give him another chance.

Our second meeting, which occurred today, went better and he’s – at least for now  – on the client list, although sort of in the probationary category. I’m hopeful that this will be one of those situations where several months from now I can laugh with his humans and say, remember that time he bit me? First though, the nasty mark he left will have to have gone completely away.

Back to the more joyful and fun time I had this past weekend, and after the dog bite.

I had the dogs wear Jasmine’s old agility leashes again on Friday, hoping that again they’d bring us good luck. Sure enough, Camm scored her needed Snooker Q wearing Jasmine’s special leash I’d purchased for her when she went to CPE Nationals in 2012. 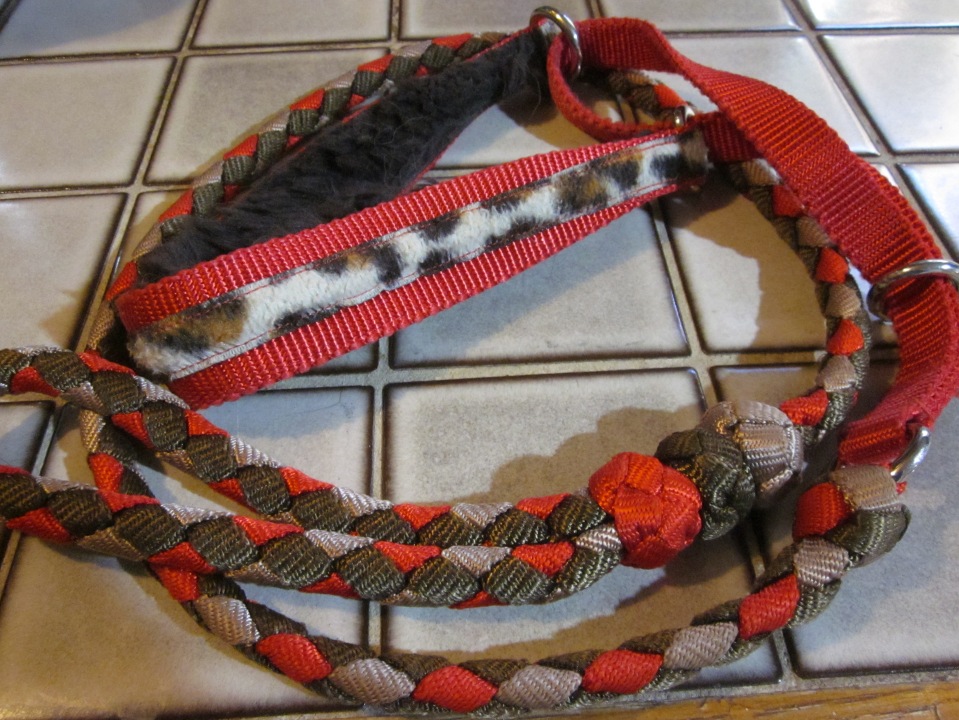 While bought for Jasmine and her coloring, this looks sexy on all of my dogs.

I’ll note too that Youke, Brady and Camm have all worn one of Jasmine’s agility leashes for their first run in competition. I’m just a little superstitious.

I’ve thought about Jasmine a lot over the past few weeks. Okay, every day. From a purely observational standpoint, it’s interesting to see how the dogs are responding to her absence.

That’s a post for another day. But, I have made it official and today put this collar on Camm. 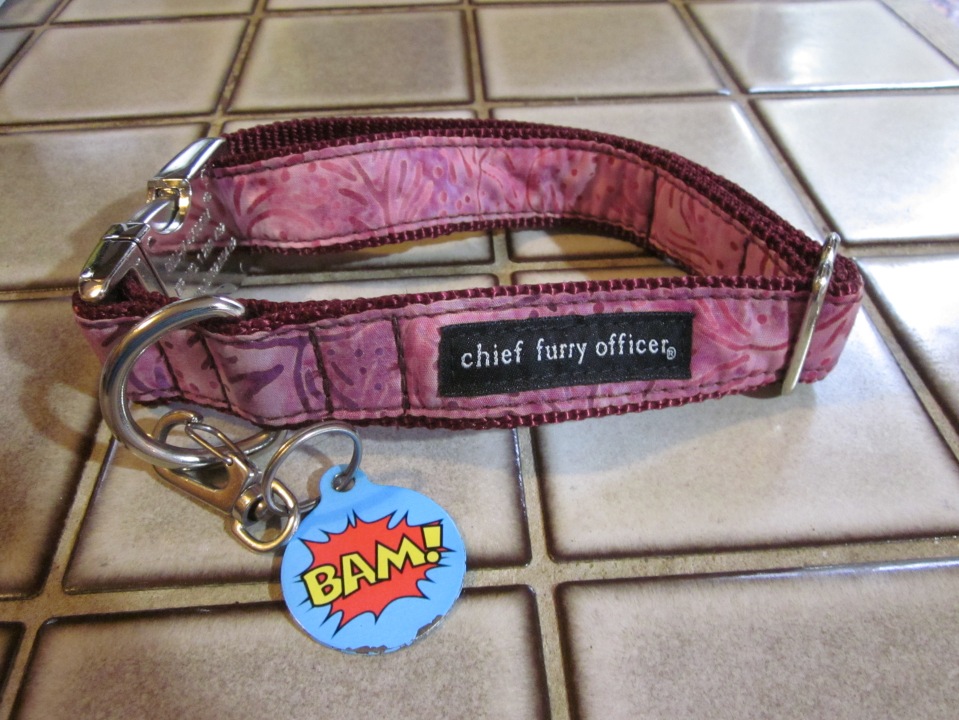 Let’s hope the title doesn’t go to her head ….

And speaking of accessories for dogs, because this trial did take place over New Year’s Eve and New Year’s Day, all three got to wear their most blinged out agility leashes on Saturday and Sunday. 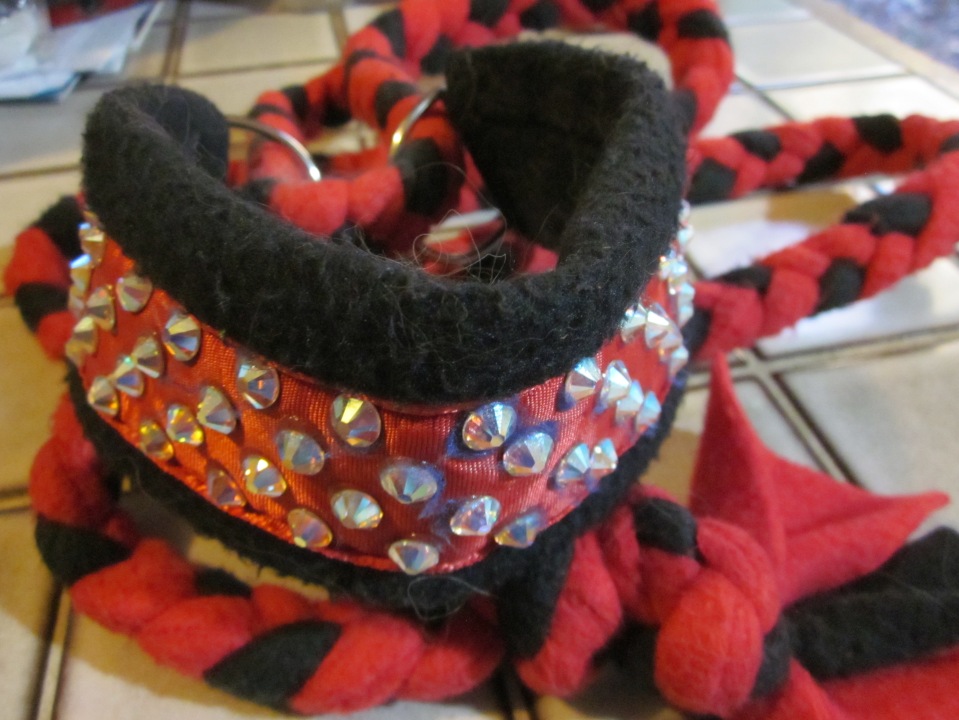 It’s possible you saw this last weekend and thought fireworks were going off.

I also wore some bling on Saturday. I wore the World’s Most Shiniest Skirt. 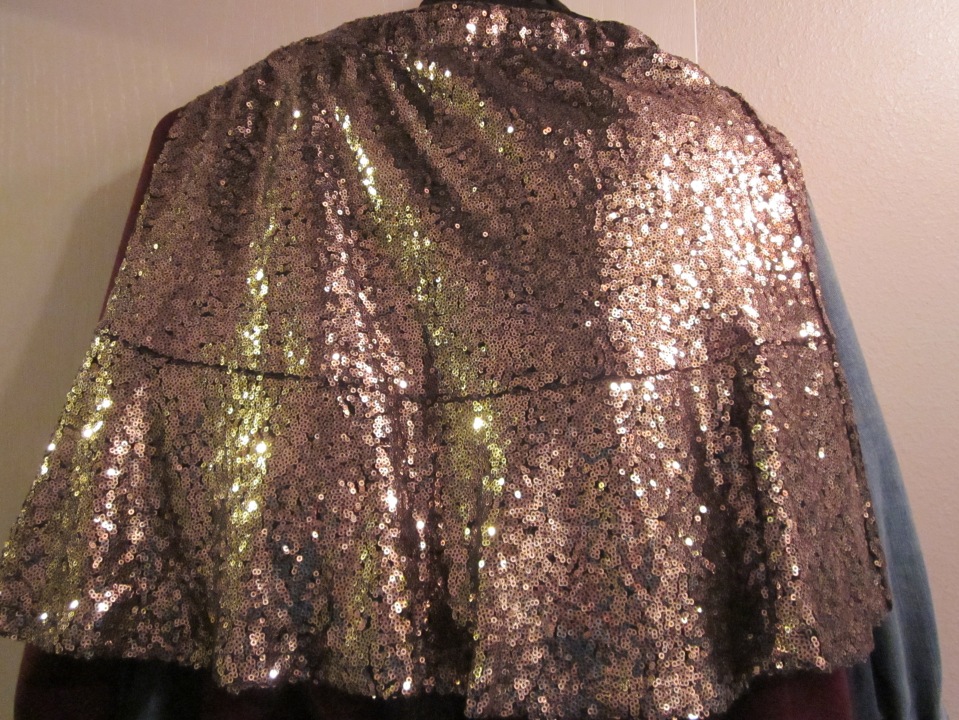 Much more gold than it appears in this crappy photo. Also, much blingy-er.

I decided that since this trial was on New Year’s Eve, I’d better look the part. Yes, I ran agility with this thing on and about five layers on top. Also, with insulated running tights underneath. I was still cold all day. Well, unless I was running one of the three dogs. I think I may actually run faster with a skirt on. Or maybe that’s because I was wearing a skirt in freezing temperatures.

Interestingly. Youke and Camm did not care that I was running them with this much distracting bling. Brady also didn’t care once he was running, but he did stop several times when getting him out of the car to peer underneath and gave me several appreciative sniffs and looks.

The dogs ran great and we had some stellar runs and some not so stellar runs. Oddly, the moment that sticks most in my head from this past weekend in terms of running with my dogs was being on the start line with Brady during some timer delay and bending down to kiss him on the top of his head. Now, I do this quite a lot with my dogs, and it’s not so much a smooch as it is a big deep breath of the top of their heads. I have a thing about smelling my dogs, in that I love the way they smell and it’s a way for me to connect with them before we run if we have time at the start line.

Brady’s smell caught me a bit off guard as he smelled really, really good. Actually Brady smells really good most of the time. He naturally seems to have the aroma of cedar, pine and grass in his coat most of the time. But on Sunday, he had all those smells and something extra special mixed in too. Not sure what it was, but he smelled fabulous and at that moment I could not stop sniffing how fabulous he was. I stood bent over the top of his head breathing in his specialness and wondering if there was a way to develop and patent that smell. Probably not the kind of thing most people think of just before they are about to run their dog on an agility course.

It was all good though. We ended up having a really awesome run and probably my favorite with him of the weekend.

I had a lot of fun hanging out with friends, seeing ones I haven’t seen in a while, making some new ones and just laughing.

I’m not big on the drama, histrionics and expectations of the year’s end and the start of a new one, but I do love when a year ends with laughter and starts on that same note.