The Roommate, and Other Special Things

This doesn’t mean that I don’t love him. It just means that I see him for the dog that he is and am honest about it. And you’ll never catch me calling him, or any of the other dogs, my fuzzy-wuzzy little fur-babies. Because they’re not. They’re dogs. Wonderful alien beings that seem to feel and know more about humans than humans know, but that have their own personalities and quirks, which sometimes means they are assholes and sometimes means they are the most incredible living beings on earth.

Last week was not kind. But the weekend was sort of magical.

I won’t go into the details of what made last week not so great, except to say that Wednesday Jasmine did a lot of puking and Thursday Brady did a lot of pooping.

Being the kind and considerate dog that she is generally, Jasmine cleaned up most of the messes herself. In fact, I didn’t even know she was puking that much until I went to bed and found the wet spots in the carpet upstairs. However, I stepped merely in a wet spot, not a puke mess. The one puke I actually saw in action, I caught her in time to rush her outside to do it.

Brady was another story. I came home Thursday to a mess on the carpet downstairs. Naturally I accused Jasmine. I later realized it was probably Brady, but since he’s never soiled inside, he was the last of the four I would’ve considered. Given that it was an unkind week, I was tired and grumpy, and became livid when I came home to that mess. Even Camm had to give up trying to console me.

Camm would make a great therapy dog – for me. Whenever I get upset – in an extremely sad or mad way – she does her best to calm me down. Often this works, but there are days, like last Thursday, when I’m so far over the edge, that even she knows it’s best to keep her distance.

Long story short, Brady had an extremely upset tummy. Unfortunately, the combination of explosive diarrhea and gorgeous fluffy pantaloons is not good. I lost count of how many times I popped him in the bathtub to wash him off after Bath #3.

Brady does not enjoy being bathed and is typically not too cooperative. By the end of the evening – somewhere around 11 pm, he was actually hopping into the tub himself and resignedly let me soap up his butt and rinse down his feathery tail and rear end.

He was literally squeaky clean. I probably should’ve used conditioner too.

Therefore, after a long evening, a long workday and a long evening drive, I was exhausted when I arrived at the hotel last Friday night for an agility weekend.

The dogs were also a little stressed from my unpleasant mood of the prior few days.

But they were in for a huge surprise.

A friend had offered to share her room with me and the dogs for the weekend. And because she was the judge for the agility trial, she was without her own dogs, therefore, no worries about rooming with my four dogs.

My friend knows my dogs well and they adore her, but there is a difference between a few hikes, some petting at a trial and actually rooming with JaYoBaCa for the weekend. I was a little apprehensive. I wasn’t worried about Brady’s exploding butt as I was pretty sure he’d literally pooped himself out. I was worried about how crazy and obnoxious they’d all be.

Turns out that having Auntie P. as your roommate is THE. BEST. THING. EVER.

All fours dogs were extremely excited and happy that Auntie P. was actually staying in the room with them and conveniently SLEEPING IN THE OTHER BED. There was much hopping up and down on beds, hugging of Auntie P. and licking of Auntie P.

There was also initially some confusion. To sleep with Human Mom as usual or to sleep with Auntie P.? Since this was so unclear for a while, there was a great deal of hopping from one bed to the other. And since they are athletic dogs, this was easily accomplished by merely jumping from bed to bed.

Eventually, and much, much later that night, Youke, Camm and Jasmine decided the usual sleeping arrangements would suffice and slept with me.

Brady did snuggle with his beloved Auntie P. for a while, but eventually, he too chose his typical sleeping place somewhere on the floor.

The best part was the mornings. The dogs were clearly delighted that Auntie P. was still there each morning and chose to snuggle into bed with her while I took a pair of them outside and then rotated the other pair outside.

I was a little worried since Auntie P. was the judge for our trial and Youke and Brady were running this weekend.

I need not have been concerned. Apparently, both boys have a very strong work ethic. In one gobsmacking moment that occurred during the trial, I walked past Auntie P. with Brady on the leash beside me. I expected him to drag me over to her as he tried to wriggle his way between her legs like he ordinarily does when he sees her at agility trials. Nope. She even walked up to us and petted him, but he gave her a cursory glance and barely paid her any attention.

It was almost like he knew she was the judge.

Neither he nor Youke ever glanced at her during their runs in the ring that I ever saw. I guess there’s something to be said about the work ethic and intensity of a border collie.

Still, I’m glad Camm wasn’t running this past weekend. Of all the dogs, I think she was the one most beside herself with Auntie P.’s presence as our roommate. Every time my back was turned, and even when it was not, there she was making goo-goo eyes at Auntie.

I think Brady’s newly cleansed and super fluffy butt might have had the incidental impact of cleansing his attitude of late.

Brady and I ran in 12 runs and earned 10 #1s. Granted, there are not a lot of dogs that run in his particular division and this was not a huge trial, but his times were often the fastest in the entire class or within the top three fastest times. And we ran clean in 10 of those runs. Again, we just couldn’t get those Chances qualifying scores. His awesome performance earned him Elite Large Dog- Second Place in the Columbia Cup in last weekend’s NADAC agility trial. He also won me a fabulous tee-shirt that brags that we ran clean in all four Regular runs.

More than the accomplishment though, was the flow and fun of our runs. We synched as a team and it felt marvelous.

Youke and I also had a successful weekend. I made some silly handler errors with Youke, which he obligingly followed. My incredibly bad habit of peeling off too early and not holding support haunts me with Youke. He is so pressure sensitive and the instant pressure is released, he peels off with me. Still, he was super happy to play and the pictures from the trial all show his crazy train face, which is the look he gets when he thinks something is super fun and awesome.

Jasmine and Camm got to walk the fairgrounds and do some exploring. Not so notable for Jasmine, but very much so for Camm as she’s walking for the most part without a limp at all now.

In fact, this evening she got to do something she hasn’t done for a couple of months. She got to come on a walk with her brothers and sister through the woods.

Some pictures from the weekend. All agility photos taken by Joe Camp. Candids are by me. 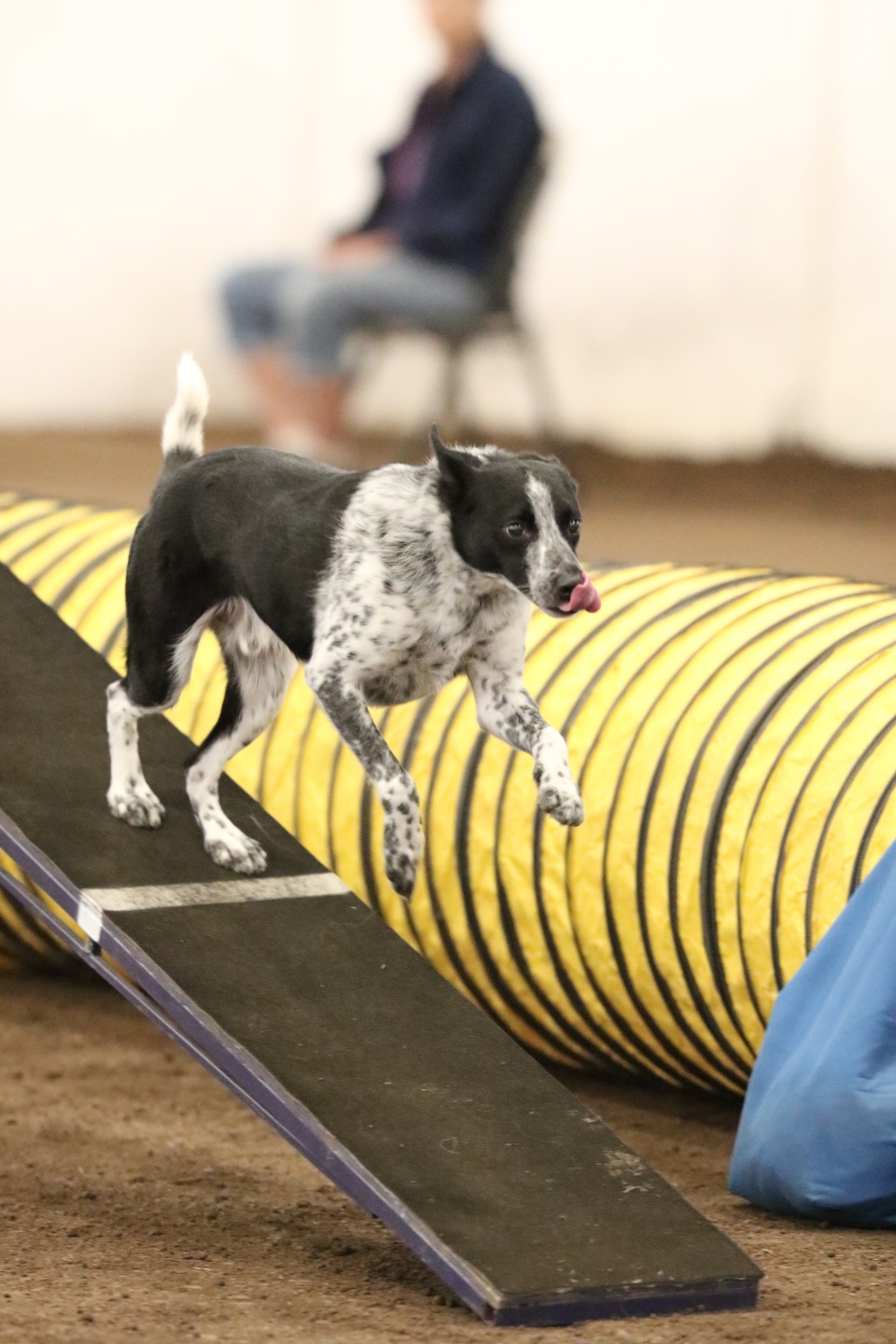 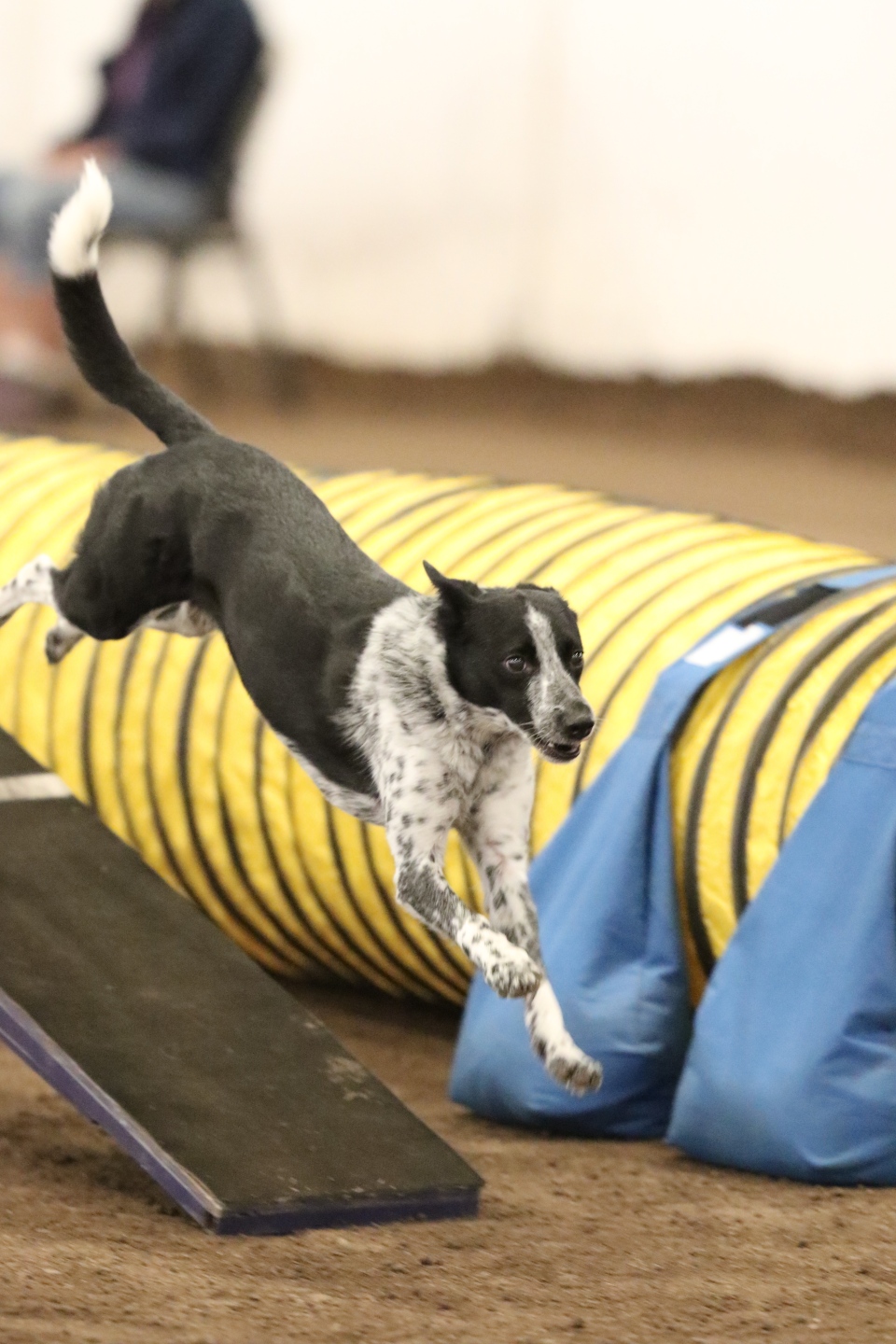 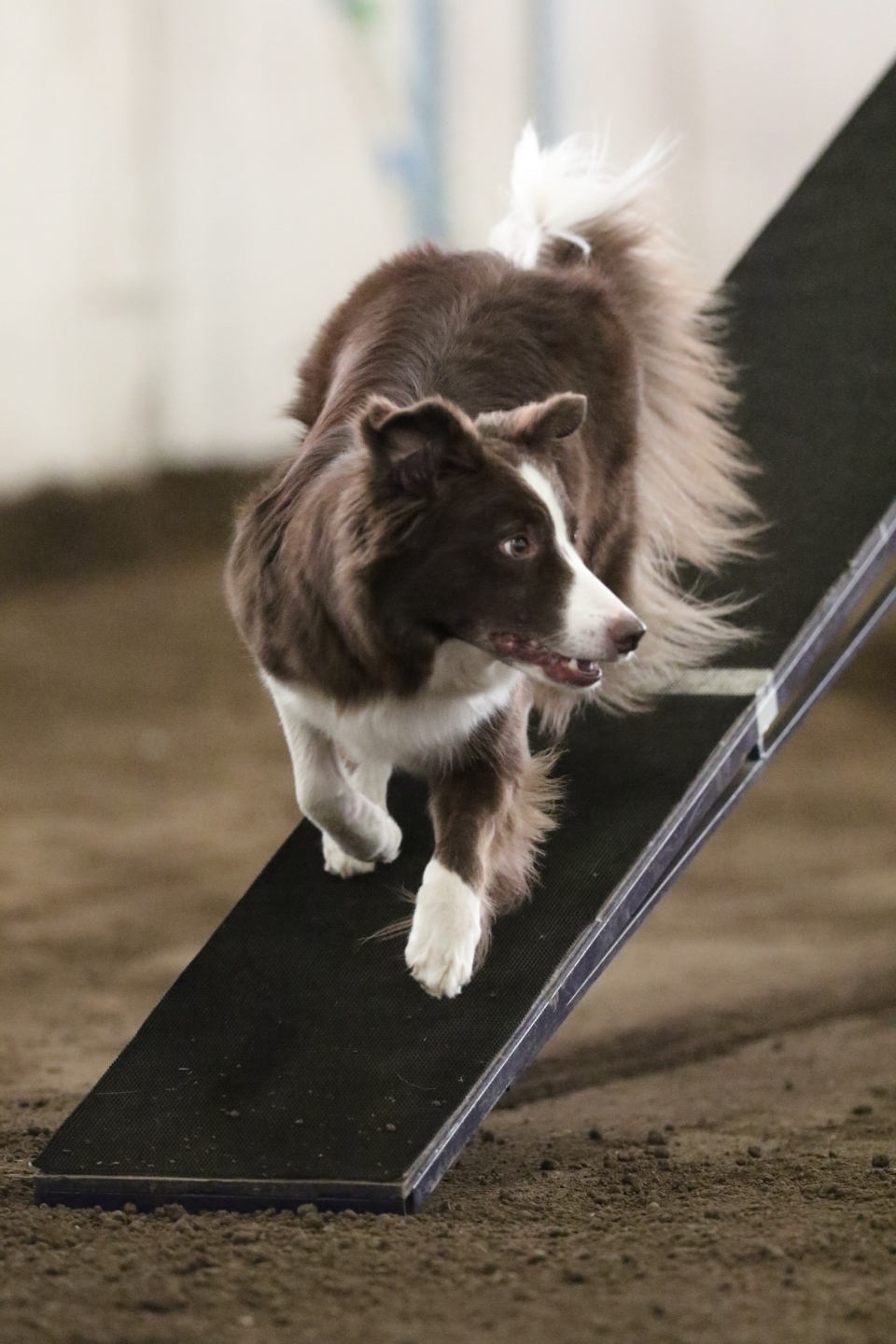 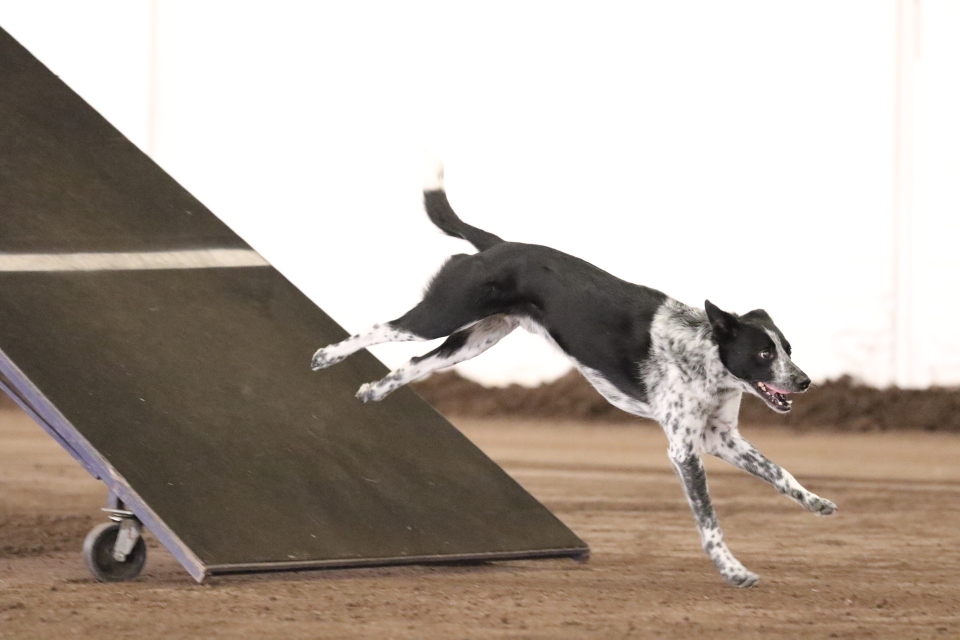 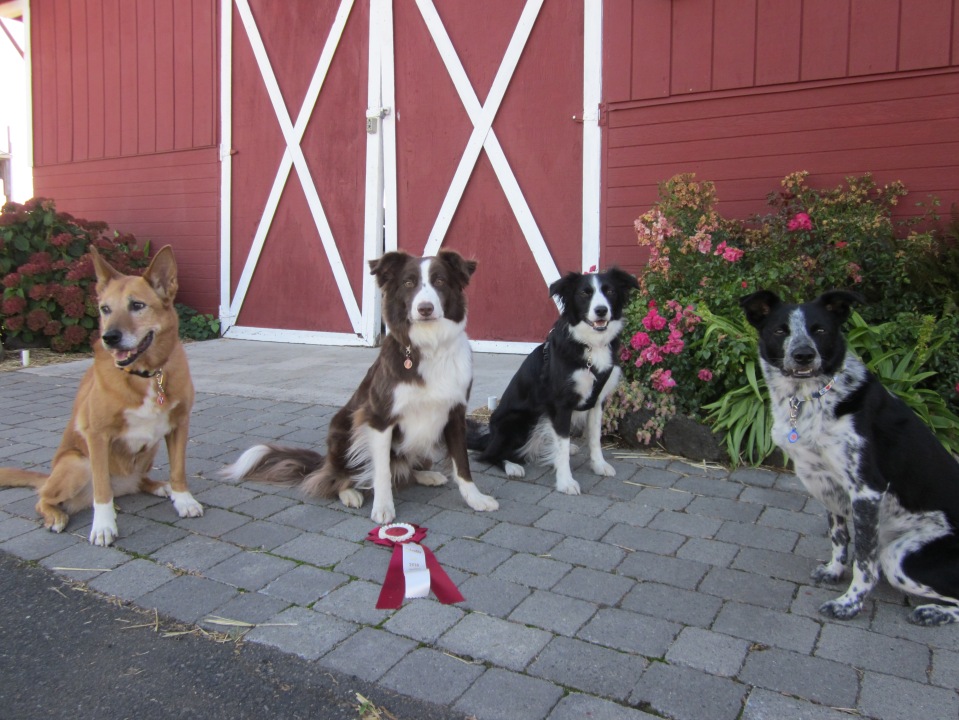 Brady and his pretty ribbon