Today is a recovery day. Also known as a “lost day.”

The dogs and I slept until 11 am this morning. I know. Shameful. The funny thing is, that I actually had to push the dogs aside to climb out of bed. I suspect they would’ve slept until at least noon or later. That is just crazy.

Of course, we didn’t go to bed until almost 3 am.

The reason for the uber late bedtime was that I drove back from an agility trial on Vancouver Island in British Columbia with the boys last night and picked up the girls on the way home.

I can’t really speak for the girls over the weekend. The woman they stay with informed me that were both very good and that Camm played with the resident small dogs – a fat little pug and a fluffy little thing that resembles a Havanese, I had sent a text to the woman while waiting for the ferry to get back to the lower mainland in Vancouver, BC that we’d missed the two earlier ferries and wouldn’t be back until well after midnight. However, she’s a night owl and texted me back at midnight that she was still up and I was free to come pick up the girls. I was about 30 minutes from her house at that point and quickly weighed the decision of going back out on Monday to get Jasmine and Camm versus just spending a little extra time to get them then. I opted for the after midnight option.

Both girls were ecstatic to see me. Two grumpy boys were a little less so to see them, but relinquished some space for them in the jeep so we could be back together as a family unit.

While I’m sure the girls didn’t have their usual activity level, I know that my dogs worry to some degree when they’re away from me, which leads to very tired dogs. In fact, both girls are presently crashed around me as I write this and show no sign of moving anytime soon.

I saw the boys when I made coffee and fed them. They’ve since returned to bed.

We got home at about 1:30 am-ish, but I had to unpack the jeep and decided to get at least one load of laundry started. Camm also decided it was party time. Apparently, in Camm’s world, if you’re still up that late, one might as well make a party out of it. I sometimes forget she’s around 21-25 in human years.

And then all of a sudden, everyone, including me, was ready to crash. Apparently we slept well.

It’s good to be home, even if today is a complete waste and I feel like I’m in the twilight zone.

I had contemplated staying over another night on Vancouver Island to catch up with friends some more and and just getting an early ferry back Monday morning, but I hit a wall Sunday afternoon and just wanted the trial to be over and to get back home.

I knew I’d never catch the 5 pm ferry, but had hoped to catch the 7 pm sailing. Apparently there’d been some kind of mechanical issue as BC Ferries was using a much smaller boat and the 7 pm sailing filled quickly. The next one wasn’t until 9 pm. Since I’d arrived at the dock at around 5 pm, that was a bit disheartening. Both Youke and Brady were so exhausted by then that they just curled up into tight little balls in the back and slept. Luckily, the ferry service realized the issue – I’m sure the hundreds of cars waiting was a major hint – and brought in a larger ferry and made an extra 8 pm sailing to the lower mainland.

Just like the trip up, the border crossing, thankfully, was very quick and efficient. The only problematic issue was the driving rain once I hit the lower mainland and that didn’t stop until I was much closer to home. It was actual rain, not the usual sprinkles, which necessitated driving nearly 20 miles under the speed I normally do for fear of hydroplaning. In fact, I did see a couple of cars on the near vacant highway that had gone off the road. I did not want to join their company.

The NADAC agility trail in Canada is one I look forward to every year and is one of my favorite trials of the entire year.

Youke and I have gone to this October trial every year since 2010. He and I have had a myriad of successes and not-so-great moments at this trial. Typically, it’s the latter as the trial is always the last stop on the October Whirlwind Tour for us. This year, Youke did the best he’s ever done at this particular trial.

I started off on Friday still being worried about him due to the wasp sting or stings from Thursday. While our one Friday run wasn’t great, he was running fast and happy. On Saturday, something magical happened between us. We were running in synch and smoothly. So well, that I made a last-minute decision to enter him in jumpers at the end of the day. I’d avoided doing so when I signed up for the trial as jumpers isn’t his favorite usually and being the last run of the day he typically just doesn’t have the gas to have any fun with it. It ended up being my favorite run of the entire weekend. He was smooth and flawless and I felt like my handling was similar. It was a lovely run.

On the other hand, Brady and I were a bit of a mess.

I’m not sure what the issue was. It wasn’t as if we were absolutely terrible or completely out of synch, but most of Saturday Brady felt the need to argue with me and/or to blow virtually every single contact. Other moments started off brilliantly, but then we’d completely disconnect somewhere on the course.

It actually felt like he was slightly pissed off with me about something. Granted, I did need to speak rather firmly with him that morning about his mouthing off about some truck that he saw that he didn’t like as we left for the fairgrounds where the trial was being held, but I sensed that whatever it was started before then.

After our last run of the day on Saturday at about 5 pm, I decided to take the boys to the beach for a re-set and for some play time. It seemed important especially to have a re-set with Brady and to “fix” whatever was wrong between us.

The time at the beach was awesome and I’m so glad we went. Although it had been a fairly nice day and was a lovely evening, there was hardly anyone there when we arrived. When we returned to the car at 6:30, we had the entire place to ourselves. In between, I played ball with the dogs, we romped on the beach, played in the water, dug in the sand, explored the beach grasses and brush and even had some lovely dog-on-dog greetings from a couple of dogs walking with their people. That last bit was especially important to me for Brady.

I’ve found over the years that the dogs visiting Island View Park are generally very polite and well-behaved. That makes a lovely experience for Brady (as well as my other dogs) and it’s even better that the humans do not feel the need to linger about and have the dogs actually engage. I’ve worked hard in the past several months to have Brady’s other encounters with dogs be positive ever since he was attacked in late April. I was especially pleased when he met two pittie-mixes Saturday evening that vaguely resembled the dogs that accosted him in the April attack during our beach stroll that gave polite greetings.

Seems as if the beach is relaxing for everybody.

I think the beach time worked. Brady and I were more in synch on Sunday and I felt that our teamwork was starting to come back together. 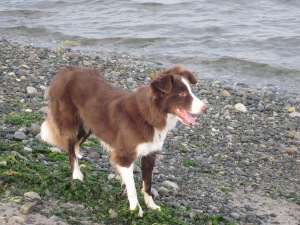 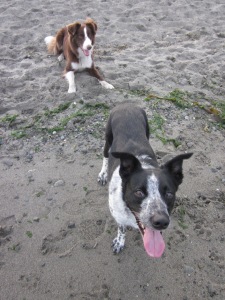 But by Sunday afternoon, my energy level had shifted and I was just ready to be done. Maybe it was the overload from the October Whirlwind Tour, but I found myself becoming annoyed by things that I can normally brush aside. Even a lengthy walk around the fairground with my best boys didn’t really ease my state of mind.

I’m glad Brady and I finished the weekend with a kick-ass tunnelers run – our best run of the weekend, but I’m also glad to be near the end of the October Whirlwind Tour.

I’m not sure we’ll be trialing in November and December at all. Youke is up for a C-ATCH in CPE and the next trial I know I definitely will do is in early January with him.

I’m taking Brady and Camm with me to do a few runs in an ASCA trial next weekend, but purely for contact training purposes. Ordinarily, I wouldn’t even be going, but I have some agility club business to attend to at the trial and figured I’d take advantage of the opportunity to do some training that this venue allows. There’s a nice place to take the dogs that’s not terribly far from the trial site, so hoping we get some time to walk some trails as well.