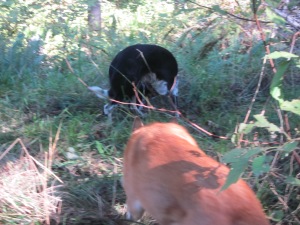 Meanwhile, the dogs are enjoying the endless sniffing. Jasmine is also enjoying the sometimes finding of dead things.

No pictures, because it was uber gross, but Jasmine began crunching on something she found on our walk today. When I saw how disgustingly icky it was, I asked her to drop it. She had to think long and hard about it, but eventually she did. It was supremely revolting. I picked it up with the chukka ball stick to examine it. I admittedly sometimes find disgusting things interesting. After much looking, I realized it was a very messed up bunny head. The two front teeth were what finally gave it away.

Youke found something delightful to roll in. Often, my dogs’ ideas of what smells delightful and mine are not shared. However, Youke really did roll in something rather pleasant-smelling. If you like wild, woodsy, slightly musky smells that is. Hey, at least it’s not the stank that so many of my friends’ dogs decide to permeate within their fur.

Brady likes to run on ahead, but lately has been very good about waiting for the rest of us up a little ways. Sometimes though it’s a bit eery to go around a bend and find him in a down and staring intently at us. 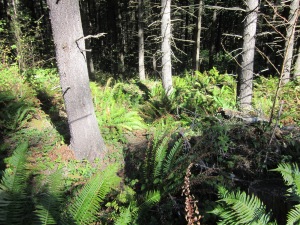 Since it was such a gorgeous afternoon, we meandered down some trace paths left by the various woodland critters. And there really is a path here. 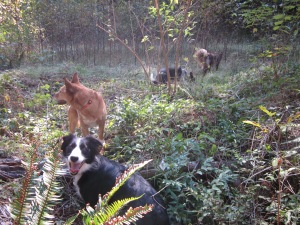 Camm was rewarded for posing for a picture exactly two times with a ball earlier this summer. Guess who now thinks she’s a supermodel? It’s amusing actually. I whip out the camera and she plants herself in front of me with her trademark smile and sparkly eyes. I guess I need to whip out some liver for Jasmine. Or maybe a bunny head. 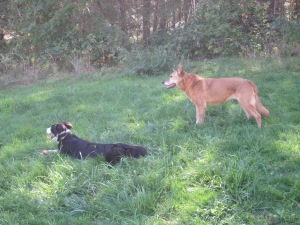 Enjoying it all while we still can. Endless summer will be ending soon.

← They Say It’s Your Birthday
The October Whirlwind Tour →