First, a bit of a disclaimer here. Nearly every morning for the past almost two months has seemed like a Sunday morning. Not that I’m complaining or anything.

Well, pretty much every day around here is like dogapalooza. Good times for canines.

Brady doesn’t typically sleep on the bed. I theorize that he finds it too warm with everyone and I’m too wiggly for him. Truthfully, some nights I don’t know how Camm stands it. She and Youke stay on the bed all night long with me. Jasmine hops on and off, depending on if she’s too warm or if my legs get restless. Youke long ago claimed the “special spot”, which is right beside me. He likes to either spoon me or cuddle up right against me, no matter what the weather. I’m not gonna lie – it’s pretty nice. But Camm likes to curl up either on my legs or right up against them. Some nights, that must be like riding a rowboat in the ocean.

I truthfully don’t think I have restless legs syndrome, but then again, I’ve never been checked out for it. I just get really restless sometimes and need to stretch or kick my legs out. I know when I have bad dreams that I kick my legs a lot too.

This Sunday morning, all four dogs stayed on the bed for some talking and cuddling time. I like to encourage this with Brady. He’s cuddly on his terms and a moment with him curled up against me and all relaxed in bed is rare.

So there I was, Youke on one side, Brady on the other, and the two girls at the foot of the bed, both with a leg to claim as their own.

I’m not into taking selfies, so no pictures of this madness, but even if I was, there’s no way I could have. Every extremity was claimed and the minute I tried to draw a hand away from either of the boys I get a very hard shove informing me that under no terms was this love-fest over. So very sweet.

It’s pretty much the only time where my fingers can rake through Brady’s fur freely and I don’t get warned about invading some personal body area. That sounds kind of kinky, but it’s not. Brady has very strict rules when it comes to touching and petting. For the most part, I’m allowed to pet his head, neck and chest. Everything else is only on a medical and urgent need basis. Every now and then he offers his belly up for some rubbing, but after a few minutes realizes how dangerously close to a personal area that is and shoves my hand away. Because I very much value Brady’s trust, I abide by his rules most of the time.

Luckily for me, the other three have no such boundaries.

Everyone was all happy and wiggly when we did finally emerge from our nest. The lack of barking on the parts of Camm and Brady as we headed outside for a bit was especially relaxed and peaceful – a true lazy Sunday morning.

What is kind of funny about this is that on Saturday, Youke and Jasmine got to go on an adventure, but I was too lazy to take Brady and Camm out at all when I came back. Maybe not entirely laziness. I actually didn’t feel that hot by the afternoon and even though I napped, I still went to bed early. Whatever it was disappeared by morning. Maybe it was all that furry and warm attention.

Cammi Pants here. Human Mommy told me she felt bad about not taking me out the day before, so I got to go on my own personal adventure with her this morning. Very nice of her. We were hardly in the car for very long and arrived at a new place I’ve never been. Weird. This place is so close and seemed pretty cool, but it was all new to me. Not sure why I never been?

Not gonna lie – mostly cuz I can’t really. I was a little nervous. Human Mommy put me in my harness for one. I can’t even remember the last time I was in that thing. I figured we must be doing some Big Thing.

And all the new smells! It was sorta exciting, but now I was getting really nervous. Human Mommy is pretty smart though. She knew I wasn’t panting cuz I was so hot. She gave me smiles and nice blinky eye faces and told me I Gotcha. She always says that to us when we’re nervous. It was scary cuz I was practically by myself. Usually my tribe is there and that makes things okay, even if I get a little scared. Sometimes I just want to bite Jasmine, but I gotta admit she’s really brave. My brothers can be really annoying and most of the time I need to boss them around a lot, but I know they got my back too, but this time it was only me and Human Mommy.

Human Mommy played a game with me when strange people walked by me. She calls it the Look game and gave me treats. That’s when I knew I was out on a learning walk. But just when I was doing some learning, she let me sniff around a lot. Then she showed me that she remembered to bring my Ball. Super good times! Its hard for me to be nervous when I play with my Ball. Human Mommy was making me do some more learning though, even playing with Ball. I had to do a lot of Waits and Downs and not pay attention to her running and moving her arms until she said that Okay word.

We stopped for a while and walked past a dog park. I was really hoping Human Mommy wouldn’t take me inside. I don’t like going to those places cuz the dogs are rude and everyone wants to say hi to me. Human Mommy knows me so well. We walked by the place.

I love my Human Mommy so much. She helps me when I need it and I help her. Like when she gets mad or upset, I hug her and kiss her and lick her until she laughs and I can feel that she doesn’t have that weird stuff inside her anymore. Human Mommy kinda does that for me too. She says it’s cuz we’re soulmates and scorpio bitches. Human Mommy says stuff I just don’t understand sometimes. Except for the bitches part.

We did more walking and sniffing and then we came to a spot with water. Yippee! I asked if I was gonna swim and stopped to see if she remembered I like to swim with my Ball. She did! I jumped a little wall thing and it was pretty deep water and I had a hard time getting back up to the wall with my Ball. Human Mommy helped me though and grabbed my harness thing. Cool! I realized then that all I had to do was swim up the wall and Human Mommy would help me out every time.

It was kinda hard though, so after a break, we found another place that was easier to get in and out and swim. 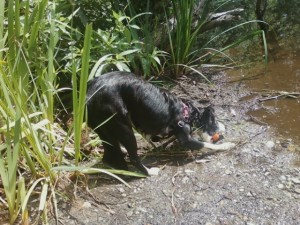 While I was swimming, I saw a teenage boy talking to my Human Mommy. I heard him saying something about his huge goofy-looking ladradoodle dog that was barking at me cuz I was swimming and playing with my ball. I guess he wanted to know if that dog could play with me. Human Mommy told him that wasn’t a good idea and said I was snarky. Whatev. Human Mommy seemed happy he asked.

We got to a different part of this place with a pretty big field. There was a dog playing with a Ball on one side of it. I looked for a second, but I knew I was supposed to mind my own business. Human Mommy seemed to think that was good, cuz again she tossed my Ball for me after she took off my leash. Woot! So there I was playing with my own Ball and my own Human Mommy when that dog, a big yellow lab kind, comes trotting over to me to say hi. I glared at him to leave me alone, but he seemed like he wanted to be friends or something. I growled at him low with Ball in my mouth and said I didn’t want to make friends. Rude! Couldn’t he see I was doing my own thing? But he got the message and trotted back to his own Humans. Cuz I didn’t know him or anything I wasn’t interested in playing with his Ball too, although when I play with my brothers I think I should have all of the Balls.

Human Mommy let me play for a while and we did more learning things, then she decided we were done. Good thing. My brain was getting tired. Human Mommy took me for a short ride to a place she calls the post office. Looks to me like she drives a long way to dump trash in a trash thing, but whatever. She said it would give me time to process things before I got back home and the other dogs were all over me. I guess that makes sense. I was really quiet for a while, but after I spent a little time thinking on things, I popped my head up and sniffed out the window until we got back home.

She was right, soon as I got in the house everyone wanted to know where I was and what I was doing. Now, I just feel like taking a nap.