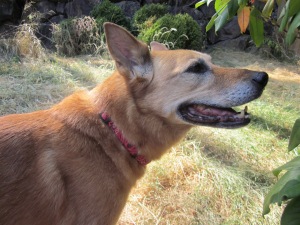 Why is it that I never see how much white there is on her face until I see a photograph?

I’m not ready to have the discussion with Jasmine yet, but it’s close enough that I do sometimes think that I’ll have to have it sooner than later. I think I had it with Sylvie when she was 12. The discussion varies as much as the dog it’s with, but for Sylvie and I it was a promise to live to 16. She was fairly healthy and it seemed like a pretty simple thing to ask. In return, I asked that she let me know when it was time and when she ready and I’d honor her wish without a fight. It worked out well for both us. 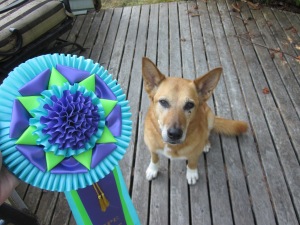 Jasmine earned her third championship title in an agility venue. Since her “registered” name in Canine Performance Events (CPE) is Jasmine K. Vitch, her official title is something like: Jasmine K. Vitch, CT-ATCH 3.

I’m all about a simple catchy name that sounds good when it’s yelled, be that for an emergency recall or as an abrupt warning to ward off the naughty. I abhor fancy breeder type names that are a pretentious 15 syllables or that take up more than two lines. However, I decided many years ago when signing up for CPE registration numbers for competition that I’d play off that dog-fancy crap and play off my dogs’ nicknames.

Jasmine apparently has other fancy titles given the certificates that randomly appear in the mail, but since I don’t really pay much attention to that stuff and never track anything but the basics, I don’t really recall what they are. As you might guess, I also think it’s ridiculous to follow a dog’s name with all the fancy alphabet letters.

It’s not as if the dogs care at all. Although, I suspect Jasmine did kinda enjoy getting to do a silly run around the agility ring with me waving the huge ribbon and carrying a pole (yup, when you win something big you get not only a fabulous pretty-colored ribbon, but a decorated jump pole too). I can’t speak for all dogs, but for Jasmine, I think just running around for no real reason and not being specifically pointed toward an obstacle was reason enough for a celebration. 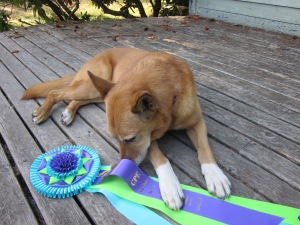 That black spot is dried blood from a scrape under her eye she got from chasing a critter last week at 1 am on a potty outing. That is much more fun to do than ‘gility.

Which is why this weekend will be Jasmine’s last weekend of official competition. Yup, I’m retiring Jasmine.

I haven’t really made a big deal out of it and I’m not sad about it. At least not really.

I’m a little sad that the end of an era has come and that a change is happening. But I’m very happy with the decision that I’ve made for us both and know that Jasmine will be thrilled. Since the best part of ‘gility for Jasmine has always been visiting with people and bossing around her siblings, she’ll still get to ride along on occasion and keep things in line.

I decided shortly after I started competing in agility with Jasmine that when the time came, I would retire her when she was still on top and still in good condition. Jasmine is now almost 12 and one of the fittest dogs I know. No exaggeration – she’s in better condition now than when she was two years old. A lifetime of playing and chasing critters will do that. And eating good stuff, along with the occasional cupcake.

This is no recrimination on anyone else. When it comes to their dogs, people can be very defensive and righteous. I’m no better.

I just made a decision quite some time ago that I didn’t want to cajole a decrepit dog around an obstacle course. I love that Jasmine obtained her third big title by jumping the same jump height she started with. Jasmine also actually made the decision phenomenally easy by not finding doing dog agility nearly as much fun as I do.

Jasmine has always done agility to humour me.

I think she liked it well enough when we first started out. But probably by the second year of doing it, I ruined it for her.

I first heard about dog agility about 20 years ago. I’d met a woman with a Siberian Husky at a deserted cemetery that served as the de facto dog park at the time in the city I was living in. She admired my recently acquired husky mix Sylvie, and encouraged me to give it a try. I was intrigued, but felt I didn’t have the time to explore a hobby like that, although it stayed in the back of my mind for years. I eventually moved to another city on the eastern seaboard that had a dog park with agility equipment in it. Like any fool with an athletic dog, I encouraged Sylvie to take an a-frame and jump 30 inches high with no thought or training. I think I got her to jump through the tire once, but never again. Probably it being set at something like 40 inches above the ground had something to do with that.

When Jasmine came into my life, I discovered I had a crazy smart athletic dog that needed some kind of outlet for her energy. Obedience work and trick training were fun, but eventually became boring for us both. Enter agility.

I never intended to compete. I suppose many people say this. I enjoyed our weekly classes and the occasional homework and reveled in the fact that Jasmine was the most focused dog in class. I distinctly remember a woman who is now a friend substituting for the usual instructor and asking me why I wasn’t competing with Jasmine and encouraging me to do so. I’ll write another time about that first agility trial, but an addiction was launched that weekend. For me. Jasmine was more of a nervous wreck than I was, something I did not immediately realize and wish now I had. That nervousness and dislike of the pressure so often involved in a performance sport, especially from a stupid new handler, colored agility for her.

Some other time I’ll write about the first year of competition and how I became a textbook case of everything not to do. It’ll be long and wordy and perhaps heartfelt and educational. Jasmine would probably put it more succinctly – the time my human became all weird and pushy and not very much fun.

Eventually, Jasmine and I re-trained and came to a working truce when it came to agility. I learned to laugh and that it is truly a game only and to enjoy those off course moments. Jasmine learned she could just continue being Jasmine.

We’ve had a lot of cool things, funny things and embarrassing things happen along the way. And the entire time, Jasmine humoured or humbled me.

Those are just a few of the many memories I have from Jasmine’s agility career, which was not so much a career as it was a way to train me to be a better human. Thanks Jasmine for being my first agility dog and so much more. You are truly the best dog.

← Echoes of Twee
Dry and Delicate →