Sometimes it’s nice to take just a dog or two and meander.

Brady had an appointment with Kerry, his groomer, today and Youke is hurt, so took Jasmine and Camm with me to explore trails. Pretty sure Youke did something to his paw, although not clear what it is. Hopefully only a tweak of some sort. Gave him doggy aspirin when we got back from the beach yesterday and some more meds this morning. He seemed actually happy to stay home alone, with a frozen stuffed kong of course. And maybe the rest time worked, because he already was favoring the paw far less when we got home late this afternoon. Looks like rest for him for the next few days, then will reevaluate. It’s possible he stepped on something wrong on any of the various trail explorations and beach trips we’ve taken in the past week or so.

The thing about having four dogs and doing so much with all of them so often is that doing anything with any less than four feels easy. Almost like a vacation.

JaYoBaCa get along very well, but the dynamics are constantly shifting and moods and attitudes change daily. It’s like watching a soap opera on Telemundo. You can grasp the basic content, but the language is spoken so fast and just when you think you’ve figured out that Carlos is Maria’s brother, you find out that he’s her step-brother and that he hates her best friend, the maid Wanda, but Wanda has a secret crush on Roberto, who is married to Maria …. and, well, you get the picture. It can be exhausting.

Yesterday, Jasmine was driving me crazy with her barking and jostling of the others. One would think, at nearly 12 years of age and numerous adventures over the past two weeks, that maybe she’d tone it down a bit. Nope. That’s not Jasmine’s style. Still, she was finally pretty tuckered out last night after three hours at the beach and hikes over the past couple of days, so I figured I’d be taking just Camm today. Wrong. Jasmine raced downstairs to the garage entry, making it pretty clear she intended to be included.

Dropped Brady off and off I went with my girls.

Hiking with the girls is actually very relaxing. It’s like the exuberance of Camm’s youth almost cancels out Jasmine’s sometimes high, frenetic energy. Not sure what it is, but the two girl-dogs get along very well in these situations and are most relaxed with one another.

Today’s plan was to explore this trail I accidentally discovered a few months ago.

I stumbled across the trail in March while exploring a scrappy, rough area I frequent with the dogs. Because until recently I didn’t always have a lot of time to divvy up dogs during the weekdays and frequently like to take all four with me and because I don’t necessarily enjoy constant management concerning mine and others (human and canine), I have a general circumference of places within a reasonable driving distance that I go. Most of these places are not particularly pretty or scenic, but the general public aren’t usually out and about either and it allows me and the dogs to just relax and explore.

Anyway, I accidentally found The Secret Trail while following the dogs as they explored the various paths made by animals. The way to The Secret Trail is completely hidden and more so now since I found it in March. The remarkable thing about The Secret Trail in March was that once I followed the faint markings of an animal path, then up alongside a rock face and pack down the faint animal path, the trial opened up and shone before me like a gem. But that particular day I was out in the early evening and had an hour before dark would descend. Not a good time to explore some unknown trail in parts where I’d seen bears before and cougar scat.

So I filed it away to explore some other day.

Fast forward to today and finally, time to check that secret out. 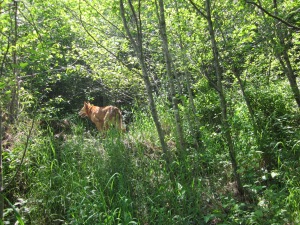 Jasmine leads the way on the faint path made by woodland critters.

This is what the trail looks like in May. Pretty overgrown and barely discernible.

We entered The Secret Trail.

Meandered for a while through the overgrown grass, and then came upon a split onto a more defined road.

Which way to go? Chose right, and then realized we’d made a loop back to a spot that I knew well. So, since we’d spent no where near the time I thought we’d spend exploring, opted to go left and onto another trail I’d never had time to explore before.

Clearly, we were being discouraged from checking this out.

Jasmine was not to be deterred and neither was I. I’ll confess, I was not as agile though.

Another meander down the trail and found out it also looped up to another trail previously known to us.

Jasmine and Camm were thankful for a water source.

So, off we went to another offshoot of a well traveled path. This one also pretty overgrown.

But sometimes, trails just dead end. And this one did, despite Jasmine’s and Camm’s best efforts to convince me that there were things to explore beyond that path. 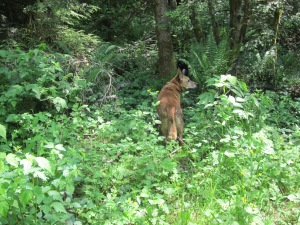 Three hours of exploring later and we headed back.

And no, I can’t tell you where this trail is. It’s a secret. 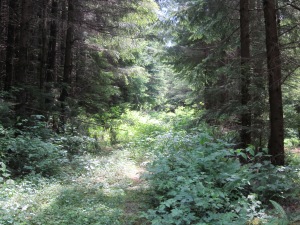