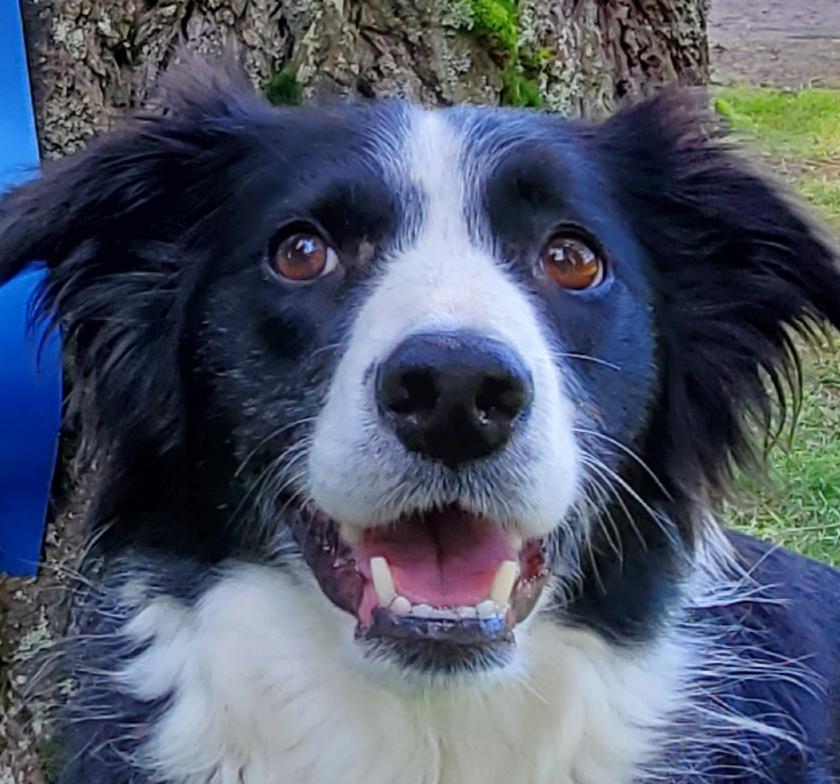 My beautiful, sparkly girl. Photo by Angie A.

This has been a weekend to remember. First though, THANK YOU TOP DOG for once again putting on an awesomely fun CPE trial! There’s probably a reason that three of my competition dogs have earned C-ATCHes at your trials (and the only one that didn’t made his debut at one and went on to earn many elsewhere).

Camm joined Jasmine (with whom I earned my very first championship anything in dog agility) , Youke and Brady on Sunday by getting her first Big Ribbon in dog agility – her CPE Agility Champion title, or C-ATCH.

The official photo with the judge. Photo by Joe Camp.

The weekend did not start out very promising though.

I started puking violently Thursday night after feeling pretty yucky most of Thursday, and much as I wanted to rally on Friday and go to the trial that I took a rare day off for, I just couldn’t do it. Food poisoning and exhaustion from the pain I’d been in all week from my lower leg – that I’d somehow mysteriously injured a week earlier – just rendered me completely immobile. I really cannot recall a day in recent years that I recorded ZERO steps. I guess the good news was that I had already taken the day off, but it sucked spending it in bed all day. However, I had four amazingly sweet dogs to sleep with for all the hours with me (despite it being a really nice day). People, teach your dog(s) to chill. It may come in handy one day. And they did it after a week of doing very little due to the afore-mentioned injured leg.

The other somewhat bright spot was that I was forced to rest my leg. That ended up being a very good thing.

Then I realized on Friday that Rhys wasn’t feeling well either. Not sure what he ate, but I know I will never eat a breakfast sandwich from a huge chain known for its golden arches ever again.

Still wasn’t feeling it Saturday, but didn’t have to be at the trial until later in the afternoon. Left Youke and Brady at home, took Camm, because she was the reason I entered the trial, and took Rhys to keep an eye on him.

Despite my fog, inability to move well and the fact that Camm’s been out of agility training since last fall, we had a smoking Jackpot run. But the fog and bum leg made our Standard run a disaster on what should’ve been a fast, easy course. Takeaways: Camm hasn’t forgotten a thing, is still blazing fast, still needs information much faster from me and gets pissed if I’m not holding up my end as the alleged handler. At least she had the decency to recognize that I am part of the team instead of trying to do it all by herself and her way.

Came home Saturday evening, through a freak hailstorm, and had some chicken soup, my first “real” food since Thursday morning. Water, ginger ale and jello doesn’t really count. Made a soup for Rhys who had been symptom free and fasting himself for nearly 24 hours. Apparently waiting around and worrying about us was stressful for Youke and Brady, so we all turned in at 9 pm.

I awoke feeling hugely better at 6:30 on Sunday. And my leg felt fantastic. Of course, what better way to ruin an injury that is finally starting to heal than by running some agility, on hard packed dirt. But I at least hedged my bet by wrapping my ankle and leg, again, something I’ve been doing for the past week. Except for Friday, when my activity consisted of letting the dogs out a few times.

Since my stomach didn’t feel as tender, I risked a cup of coffee and drove to the trial with Camm and Rhys. I had no illusions that we’d finally get the one clean – no faults – Standard run we needed for her C-ATCH, but figured it was worth a try.

As we got closer to the trial site, I realized the chances were pretty slim, but I was okay with that. Rhys was entered for a few runs and I figured there might be some training opportunities for both dogs.

As I went out to The LRoW to get Camm, I experienced a very deliberate shift in my mindset and thought process. No, I told myself, this is the day. Camm is going to get her C-ATCH today. I’m going to be the handler she needs and WE are going to do it.

As I took her out of The LRoW, I looked at her and told her she was a champion because she was my best girl dog, the most sparkly and spunky of all dogs and there will never be another like her and I believed in her and I loved her and that I knew that she was going to get her C-ATCH today.

Because I really did know it.

I wasn’t even nervous when we stepped into the ring.

Not gonna lie and say it was a perfect run. It wasn’t pretty, but it also wasn’t horrid. We’ve had far worse runs that qualified. While my mobility was improved in that run, the tape made flexion harder and I couldn’t run as hard as I would’ve liked. I also wasn’t timely with some cues. And I made a handling decision that was super awkward, but assured us of an excellent weave performance and no popping out. But in the end, it doesn’t matter. Camm qualified and it ended up being a fairly typical Standard run for us.

We had one other run on Sunday, a Jumpers Run, that ended up being decent too, but had an off course. The rest of Camm’s day was spent playing some Ball, playing and walking with her LittleBiggerBrotherBestFriendWrestlingPartner Rhys, and visiting with aunties and making new aunties.

And having her picture taken a lot. A lot. A whole lot of posing for Camm today. Camm is very good at posing and like any world-class supermodel, is paid very handsomely for her labor.

I’m so high on my sparkly, sassy wee girl Camm that I pretty much do not care if today wrecked my leg for the next few weeks.

Matching sparkly faces. Because dear friends don’t let you look like a geek. In case that’s not clear, Camm is incapable of taking a bad picture. I, on the other hand …. Photo by Angie A. 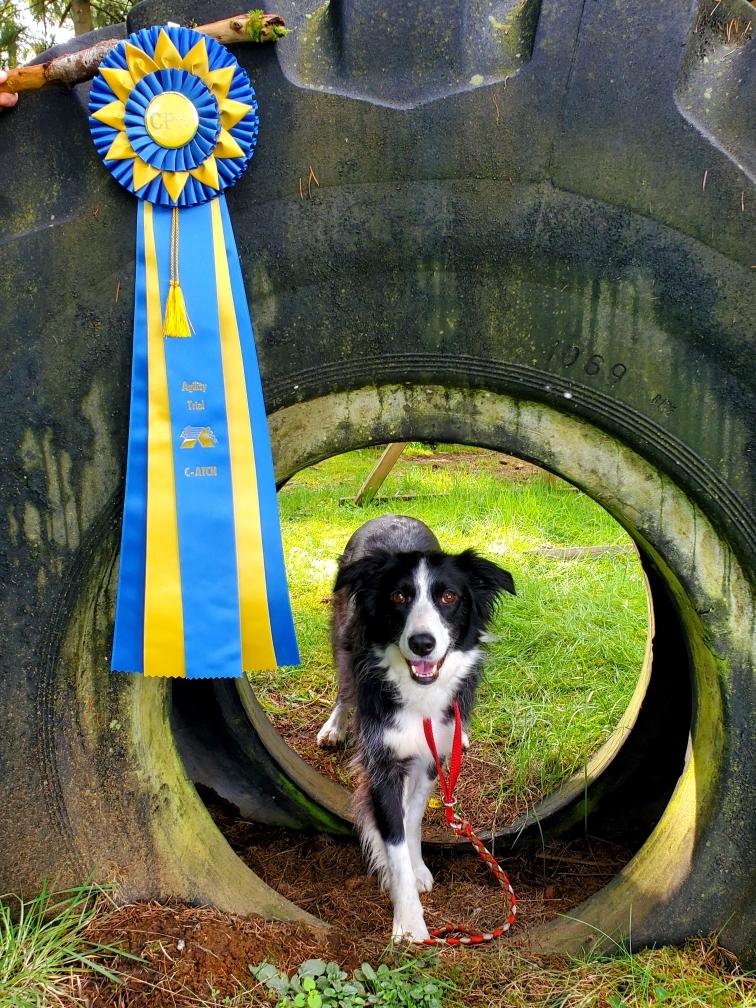 Fun fact: Camm is wearing Jasmine’s leash from CPE Nationals in 2012. I put it on her for her first run on Saturday and we had a great run. I didn’t use it for her Standard run Saturday and it was a disaster. Obviously, I used it for Sunday’s C-ATCH run. Photo by Angie A.

“Climb up into this kid’s playhouse thing for a picture Auntie Angie? Sure thing!” Photo by Angie  A.

Posing, although clearly someone has to have a slight attitude adjustment if he wants to make what Supermodel Camm does.

A Very Happy Girl and Her Ball.

← Seven, and Other Numbers
Dog + Outside = Therapy →