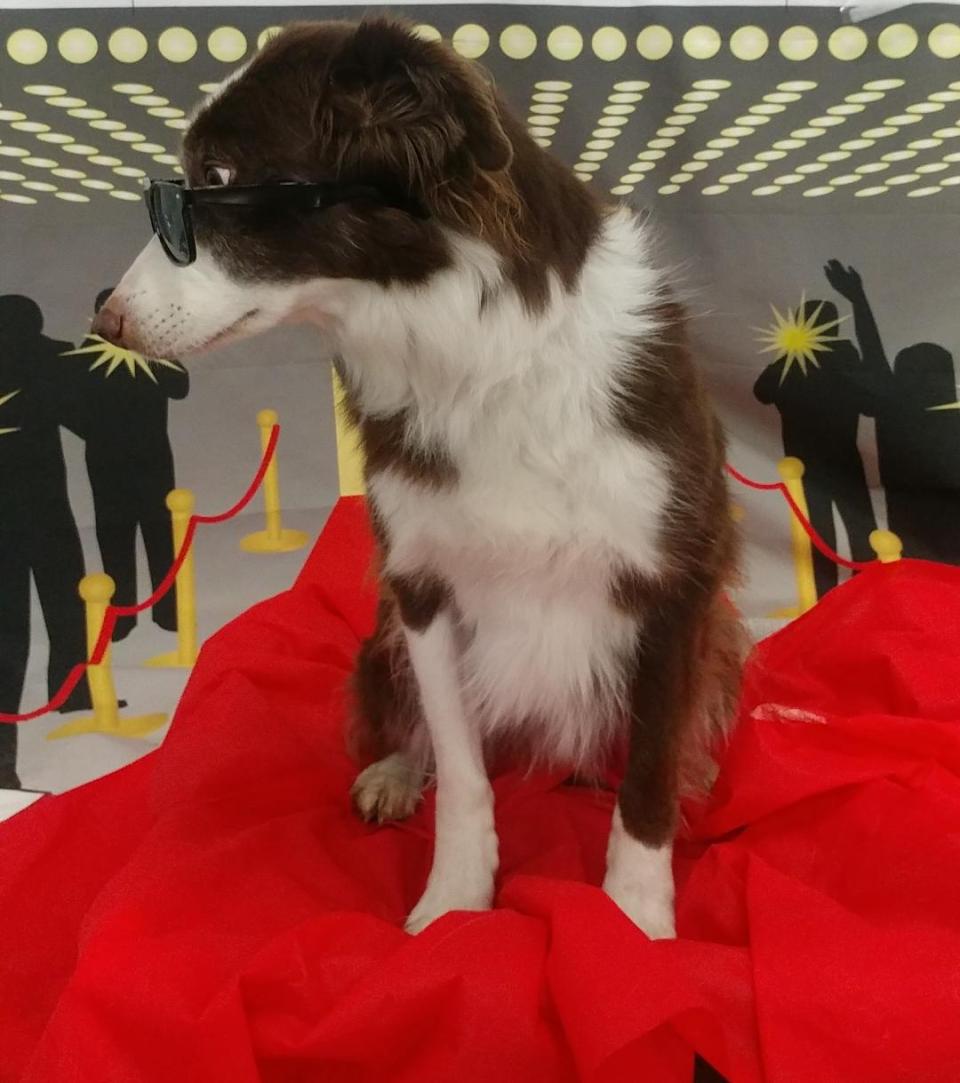 When you’re so cool you gotta wear shades

Well, December 13 is the day I designated as his birthday because that’s the day I brought him home. Nine years ago.

Let me repeat that. BRADY WILL BE TEN YEARS OLD AND I’VE BEEN WITH THIS GUY FOR NINE YEARS!! 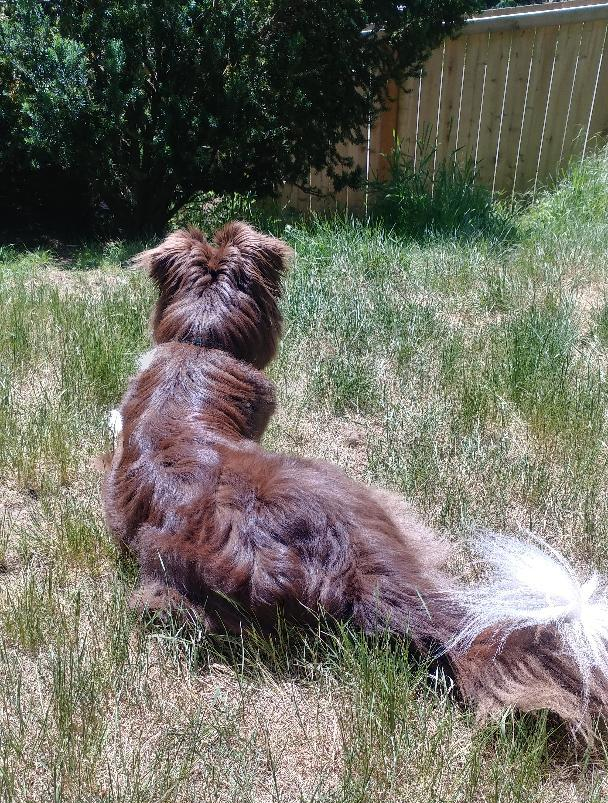 That’s a whole lot of adventures.

Nine years seems like a few minutes ago, yet also a lifetime ago. I’ve learned from every dog that has entered my adult life. Sadly, the lessons Kip tried to teach me didn’t sink in until long after his death at a far too young six years old. Sylvie gave me many, many years and I think was so grateful for her rich and adventurous life after being rescued from the streets of a slum in Lewiston, Maine and sprung from the shelter days before a very dark fate that she was willing to put up with almost anything. It’s a good thing she was such a good dog because I had her long before I was “woke” about dogs. I was still slow on the take with Jasmine, although she started me down the path toward dog geekdom and an obsession with dog agility and I did eventually listen and pay attention to what she was trying to tell me she needed. I was not allowed this luxury with Brady. Brady required that I pay immediate attention and LISTEN NOW!

Someday, I always say, I’ll write a book about Brady. And I will. Brady has taught me everything.

Suffice it to say for now that Brady’s picture could be beside so many of those adages you read about the dog-human journey.

“It’s all about the journey.”

“You get the dog you need”

In a dark, cold corner of a barn used for agility, and on the last day of a three day trial over Thanksgiving of 2010, this remarkable red dog looked deep into my eyes and asked me a question. Ive been answering it ever since.

Brady was not the dog I wanted, but he has been the dog I didn’t know I needed. 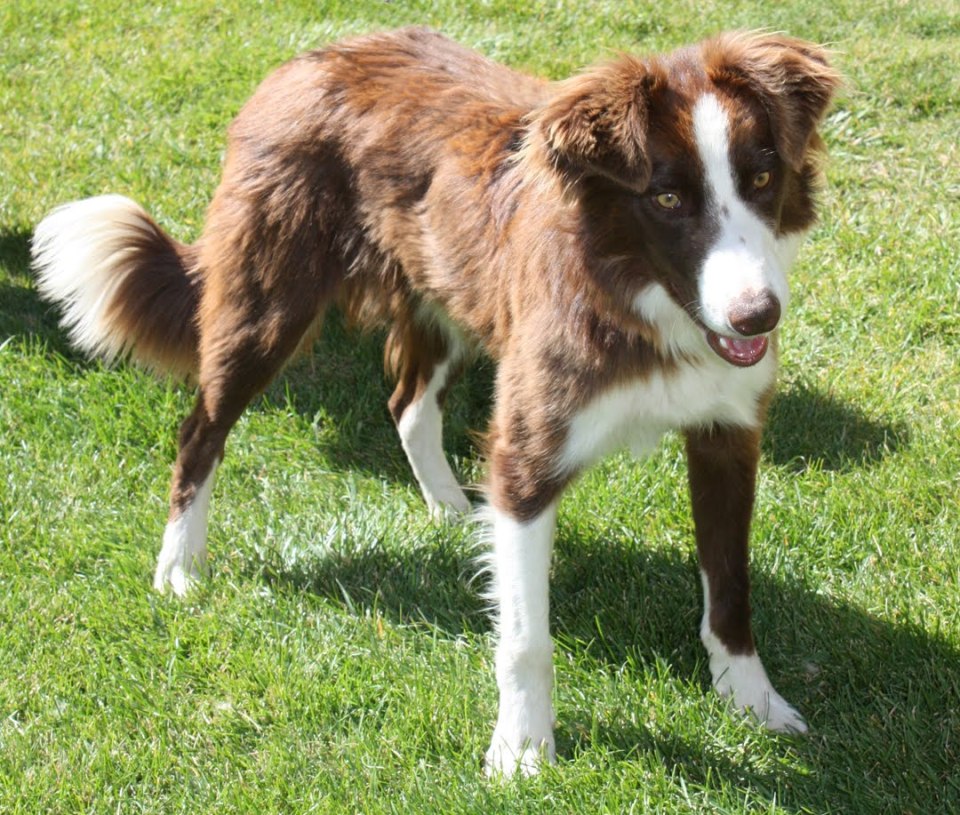 Brady, then Banjo, a few months before I adopted him.

This meme is making the rounds in the dog training, dog agility and dog geek circles I’m surrounded within: 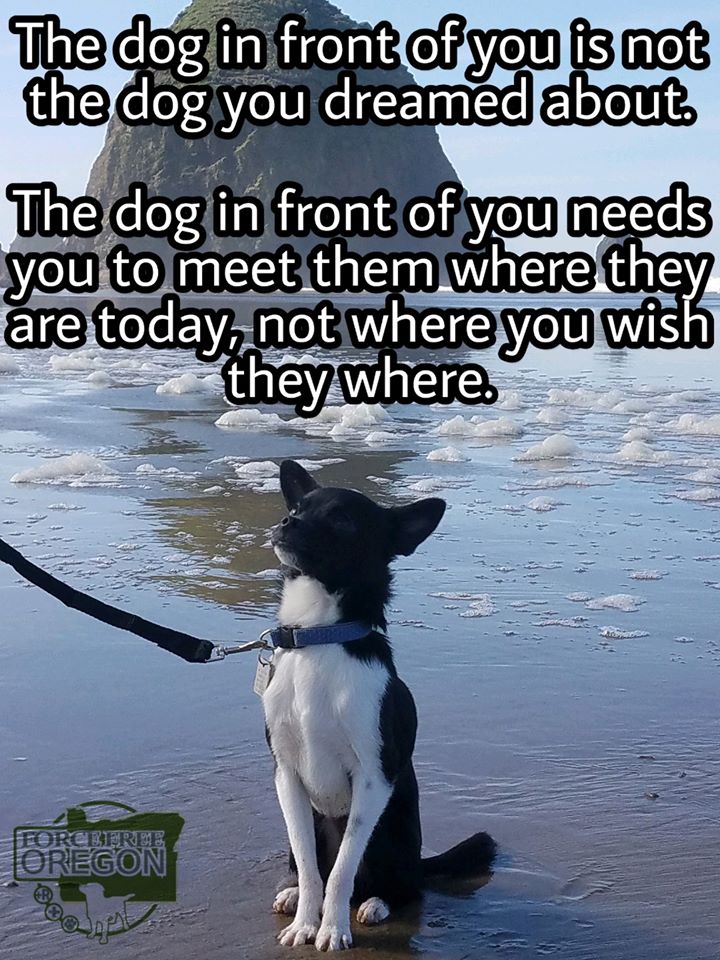 I’ve seen various versions of this for many years. Brady isn’t unique in that his picture could easily be inserted here.

In Brady’s case, once I accepted him for who he was, quirks and opinions and all, both of our lives improved. I wrote about it a few years ago in Come As You Are

Now, as this feisty, opinionated, demanding, and sometimes plain weird, red dog lies quietly sleeping on the eve of this momentous birthday, I can’t help but reflect back on all we’ve accomplished together. 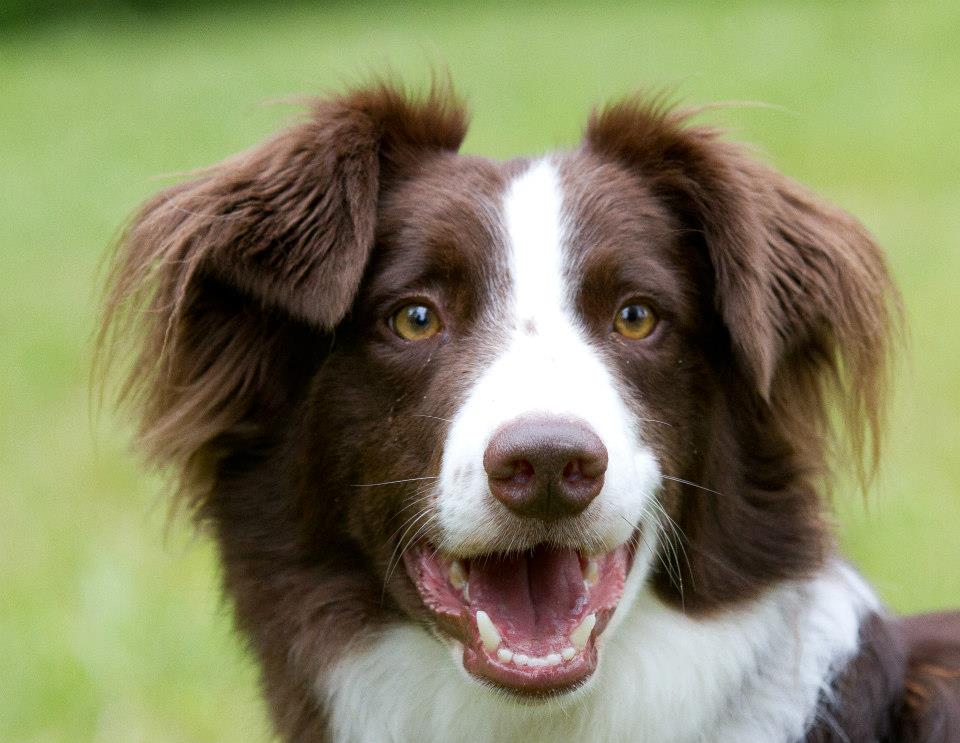 Brady at around two years old. Photo credit Angie A.

First and foremost, Brady is a wonderful hiking companion. We’ve had a lot of fun adventures over the years, some a bit more adventurous than planned. In fact, I’m pretty sure some of Brady’s adventures have shaved years off my life. If I don’t live to my goal of 100 years, I’m going to blame it on Brady.

I can’t even begin to think how many miles this dog has covered in the foothills and mountains of western Washington. 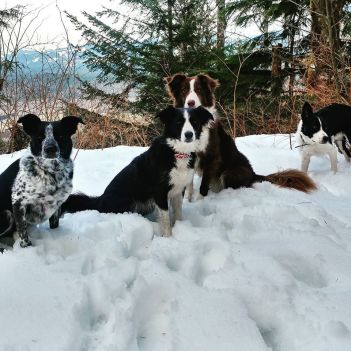 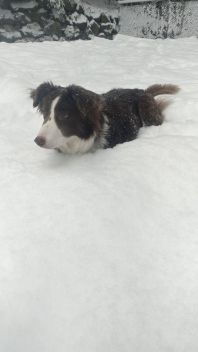 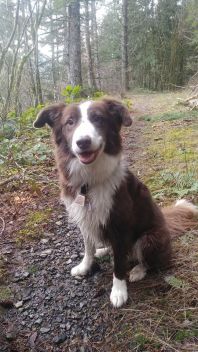 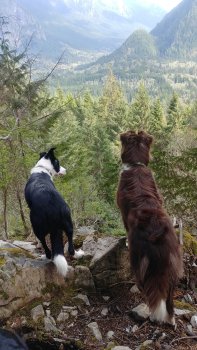 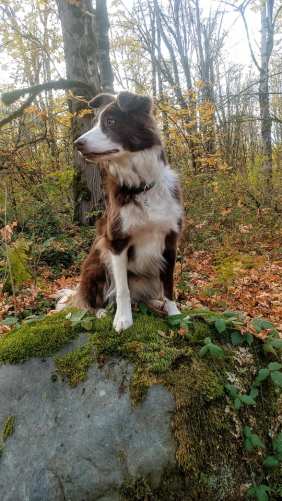 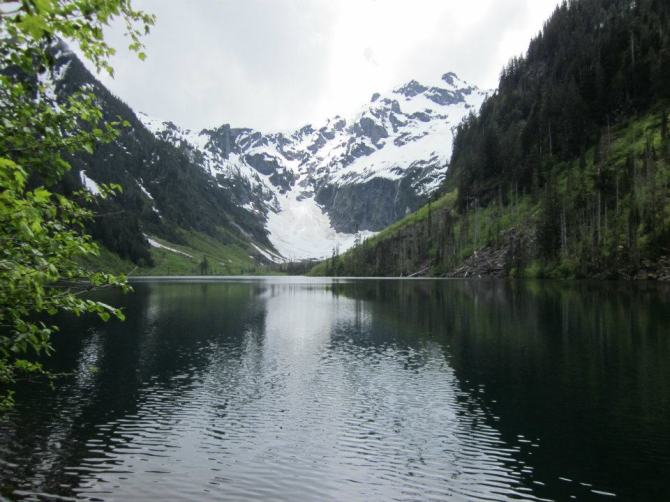 Brady has also traveled a lot of miles via car for various road trips. Most of those were for agility shows, but more than a few were for some epic adventures, including the first time he got to go to a friend’s camp on a lake in Eastern Washington and was able to swim for as much and as long as he wanted. To this day I still laugh about how exhausted he and Youke were. The road trip and week we spent on the Oregon coast was pretty special too. And of course there was the trip to Northern California and the house we stayed in that had a swimming pool. My dogs are rock stars, so naturally they got to party in the pool. Brady also thought it was an added bonus that there was a chicken coop on site, complete with chickens. Brady likes to watch chickens. And of course, there are all the road trips we’ve done to Vancouver Island for agility, walks through the woods and romps and the beach.

We’ve gone to a lot of fun places and had good times sightseeing. 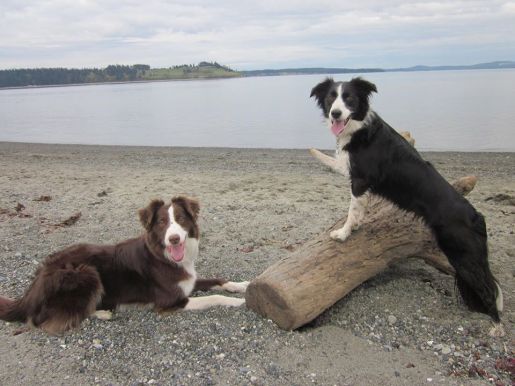 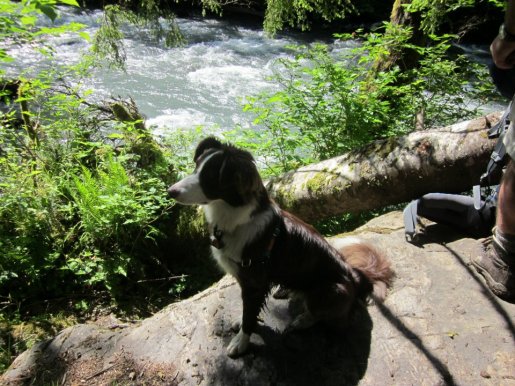 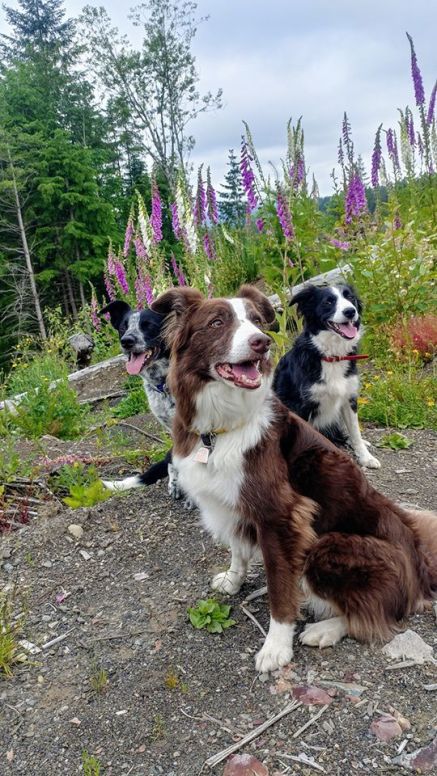 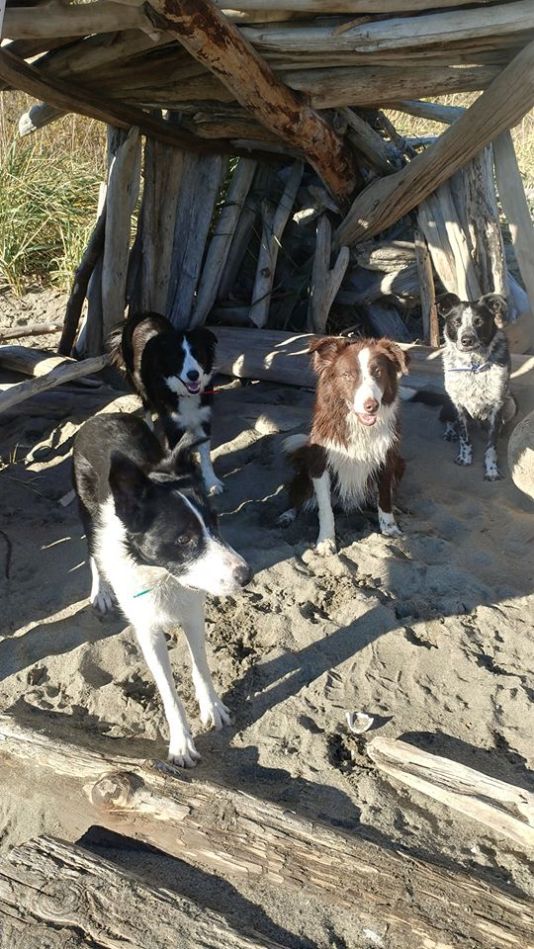 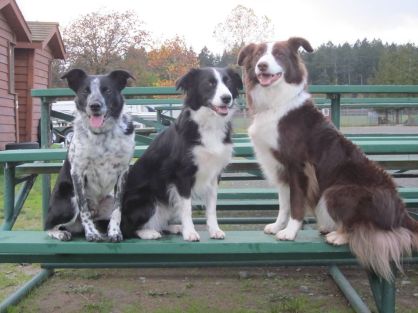 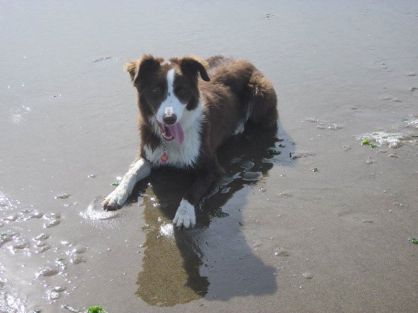 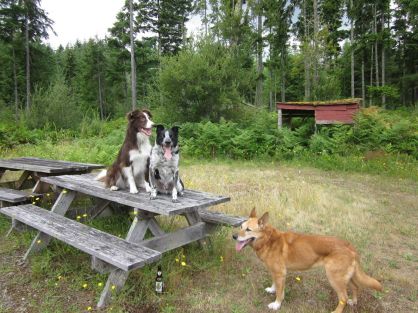 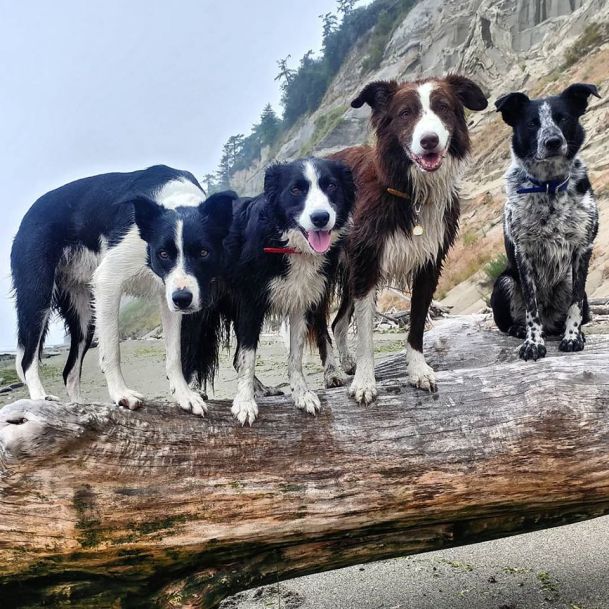 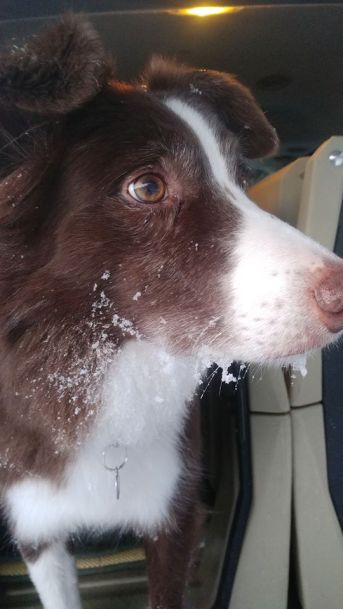 Brady is quite simply that once in a lifetime agility dog. Which is actually pretty funny considering that I didn’t think so many years ago that I’d be able to compete with him.

By the time I’d had Brady a couple of months I knew he had issues and was highly reactive and had enormous environmental sensitivities. We’d started foundation training with a new trainer to me and his progress and delight with the process was fascinating and infectious. Plus, I was learning many new things too, including how to become a better handler. While I’d like to credit my trainer, who became The Relationship Counselor – and she does deserve a great deal of credit – the real work to improve my handling was done by Brady. I do not (mostly) affectionately sometimes call him The Agility Nazi for no reason. Bad handling and late cues were dealt with swiftly and harshly, and usually with a correction. Which is a nice way of saying I got bitten, a lot.

As a result of his environmental issues, his dog reactivity issues and his lack of impulse control, I decided that I’d continue to train agility with Brady for the simple reason that I was learning to be a better handler and he was fun to work with, despite his swift reprimands. I figured my other dogs would benefit from my training and handling with Brady. And they did.

Those that insisted that I’d be able to compete and trial with him one day had no idea of the scope of his issues. In fact, I think there are maybe two people that have an inkling of the extent of what I went through with Brady. After all, there were many that had no idea I even had this red dog. Two, three years after he’d come to live with me I’d still get asked if he was my “new dog.”

Fast forward to our first trial, and over two years of intense training and counter-conditioning – and after I’d entered and then withdrawn from three trials – and Brady – hugely uncomfortable outside of the ring, trying to glare at dogs and snarling  under his breath – and then it all magically disappearing for the 30-45 seconds we were in the ring.

However, it was not instantaneous success. Our road was filled with bumps, crevices and potholes and much of the time it was an unpaved road. That training and counter-conditioning work continued for many more years.

There was the ongoing challenge of entering and exiting arenas and barns to get into the ring, there was the constant challenge of Brady’s nipping – okay, biting – of me, there was the entire year of no contact performance on the a-frame or dogwalk and there were the nearly constant arguments on course about my handling. I knew when I was perfect when he was silent and that was a rarity because Brady nitpicked about everything in the beginning and for a long time after. We had problems with end of run behavior – as in I didn’t have one and didn’t know I needed one and he invented one I didn’t care for – rushing in and biting me because the fun was suddenly over and Brady is a dog that thinks every agility course should consist of at least 30 obstacles.

And then there was Brady’s teeter fear.

Brady was unable to perform on a teeter for seven years. Of course I didn’t try to get him to perform a teeter during that entire time. I asked The Relationship Counselor to cease trying after six months. I briefly tried to train the teeter with him a year later after succumbing to some pressure from peers and other instructors. At that point in time I was competing only in NADAC with Brady as that organization doesn’t allow a teeter to be used. I was competing with him a bit in CPE, but we couldn’t run Standard courses because that organization allows the teeter, and we’d avoid it if we had other options  and we could still qualify in the CPE games courses. I pulled him from courses in which the teeter could not be avoided. During The Year Without Contacts, I trained a lot in ASCA as at the time that organization had the most generous allowed training in the ring rules, but we avoided the teeter altogether.

The Relationship Counselor though is a stubborn and determined woman underneath her understanding and wonderful demeanor and she was not to be defeated by Brady, admittedly in her personal Top Five of Training Challenges Ever Presented.

I not so jokingly told her several years ago that we could revisit Brady’s teeter fear after he got his Agility Trial Championship in NADAC (N-ATCH). Although Brady primarily trained on USDAA type courses and was fantastic, the lack of teeter prevented us from ever thinking about becoming serious about competing in that organization. I’d always loved NADAC and quite frankly, I enjoy the distance and speed often required in that venue. My aspiration was to earn N-ATCHes with both Youke and Brady and I started working to earnestly improve the distance skills we needed.

But a few summers ago, seemingly bored and after I had not seen her for a few weeks, The Relationship Counselor casually dropped that we should working again on training Brady how to perform the teeter.

I’m not sure what happened in seven years, but I suspect that Brady simply gained a lot of confidence in himself and trust in his person. He demonstrated that he was willing to learn. By the end of the summer, Brady had a teeter performance.

In September 2018, Brady earned his N-ATCH with a perfect Chances run.  It was a moment I’d fantasized about for years. But I was utterly unprepared for the enormous upswelling of emotion. I had entered the ring momentarily forgetting what was at stake, probably because I’d just run Youke and Camm on the same course. When the run ended and we’d done our celebratory run around the ring, with Brady grabbing the ribbon I was handed at one point and tearing a piece apart, huge, hot tears streaked down my face as we departed the ring. I started sobbing, not because he’d sort of ruined the ribbon – he did, but some clever stapling when we got home kind of fixed it – okay, it’s still a bit askew – but because of how very far Brady had come.

Then, this November, Brady earned his CPE Agility Championship or C-ATCH. Naturally I posed him on the teeter for his official victory photo.

Less than a month later and only a few weeks ago, Brady earned his N-ATCH 2 and his Versatility N-ATCH 2, which simply means he did a lot of things, some of them pretty hard, very well. 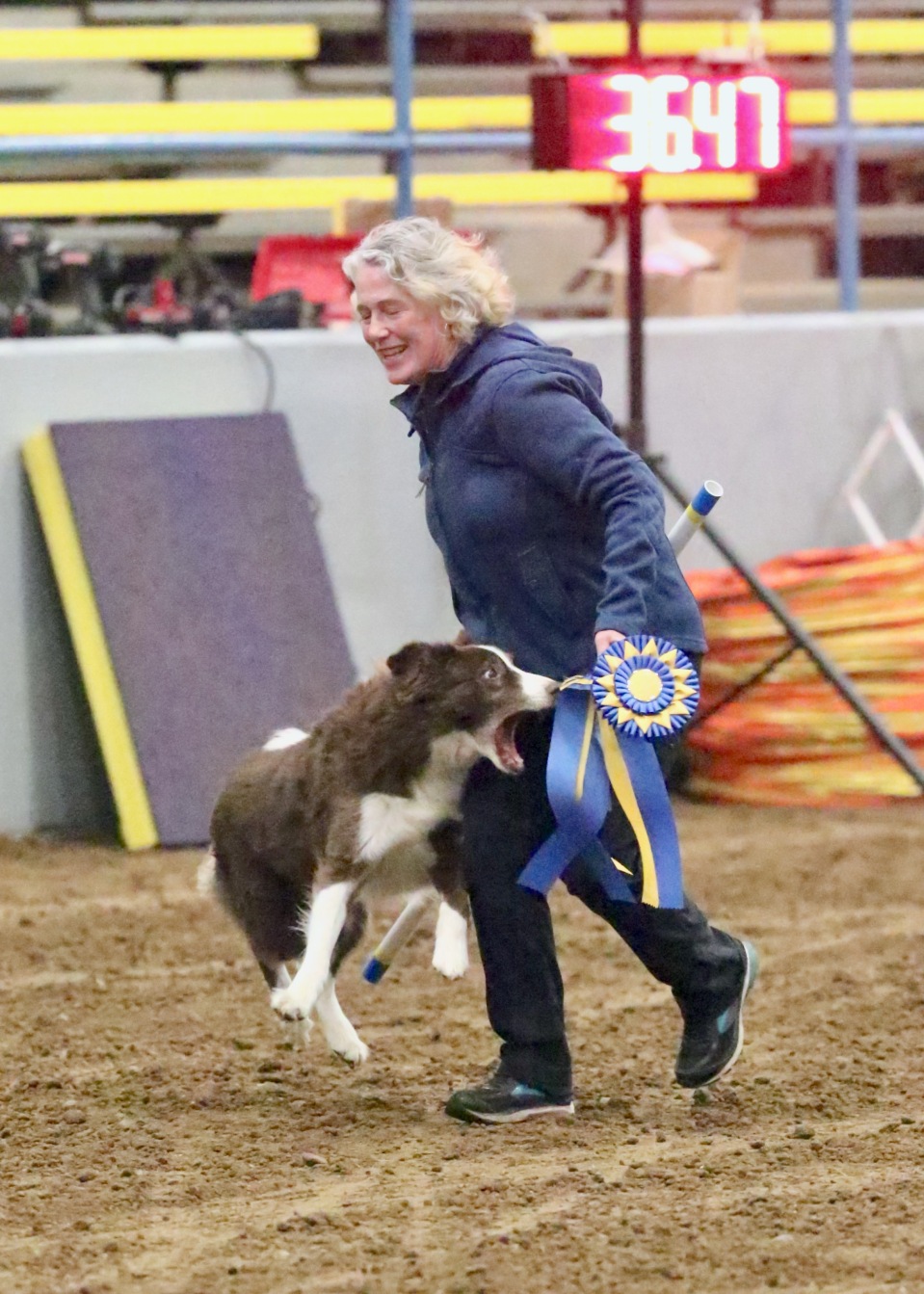 Literally so much blood, sweat and tears with this dog. Worth every salty drop shed when he crawls on top of me when I’m half laying on the couch like last night and he wants to cuddle and listen to me talk about our life together and how every single day I’m glad he asked me if I was the human who he was searching for. 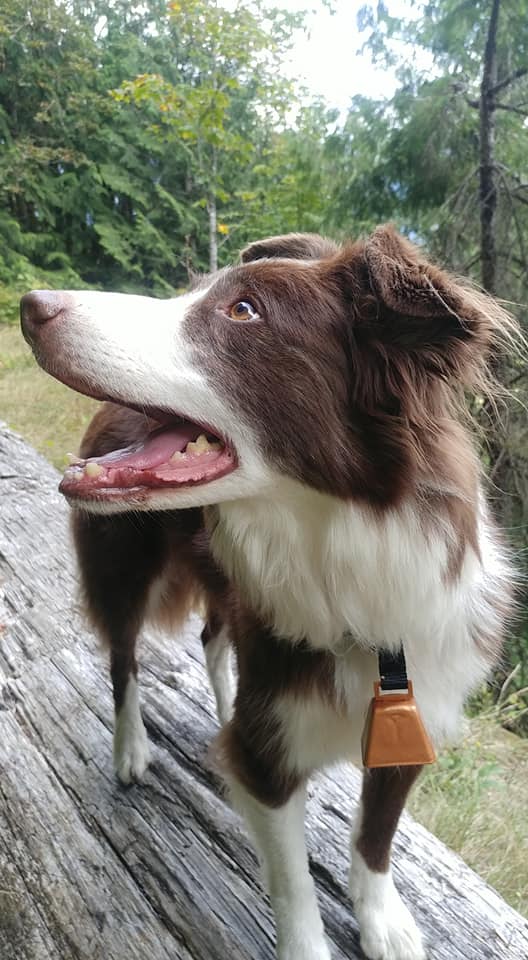