Pickles and Dogs on a Saturday Night

While I have never been one to stress out because I didn’t have big Friday night or Saturday night plans, I’m pretty sure that when I was in my 20s I also wasn’t expecting to be spending a Saturday evening happily munching away on pickles and sharing them with my dogs.

I’m pretty sure that my “normal” friends think I’ve completely lost it and have fallen into the abyss of Crazy Dog Lady. And perhaps I have. But I cannot say that I’m unhappy to be intermittently tossing a bite of pickle to a dog, then having a bite for myself, then tossing another bite to another dog, before taking a bite myself. We finished the entire jar that way.

I suppose I could be dressed nicely and drinking cocktails with fancy people instead of in a hoodie and with a dog licking pickle juice off my leg.

Weird? I suppose. But not that weird for me. I had an excellent role model for this. My mother.

Today has been fairly low key overall. Went to an agility trial, made a huge donation, came home and napped. 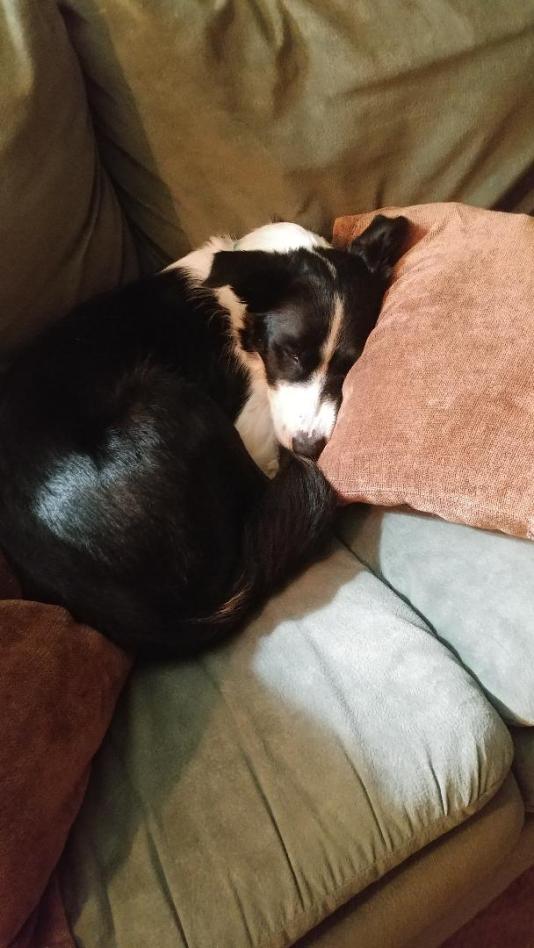 Except that during today’s particular nap, Rhys was curled up on top of my chest.

This is not an easy feat when you are nearly 40 pounds and measure over 21 inches at the shoulder.

While I had fun at today’s agility trial, doing the agility just wasn’t a priority. I opted to sleep in instead of arriving first thing in the morning for the Jumpers runs I’d entered because although officially the second day of summer, it was barely 50 degrees when I let the dogs out at 6 am. Despite that, I still opted to don a bright pair of yellow shorts, because – damn it, it’s freaking summer! Naturally, I was cold for much of the day.

Except when I was running dogs. Four dogs to be exact. And not doing it particularly well. Hence, the large donation to the club I made today in entry fees and in exactly one qualifying score. I think. I didn’t check before I left.

I’ve been entering Rhys in a few runs here and there mainly because most of the organizations are allowing some sort of toy in the ring to play with your dog. Obviously it’s then a non-qualifying run, but it’d be a non-qualifying run with Rhys anyway at this point. 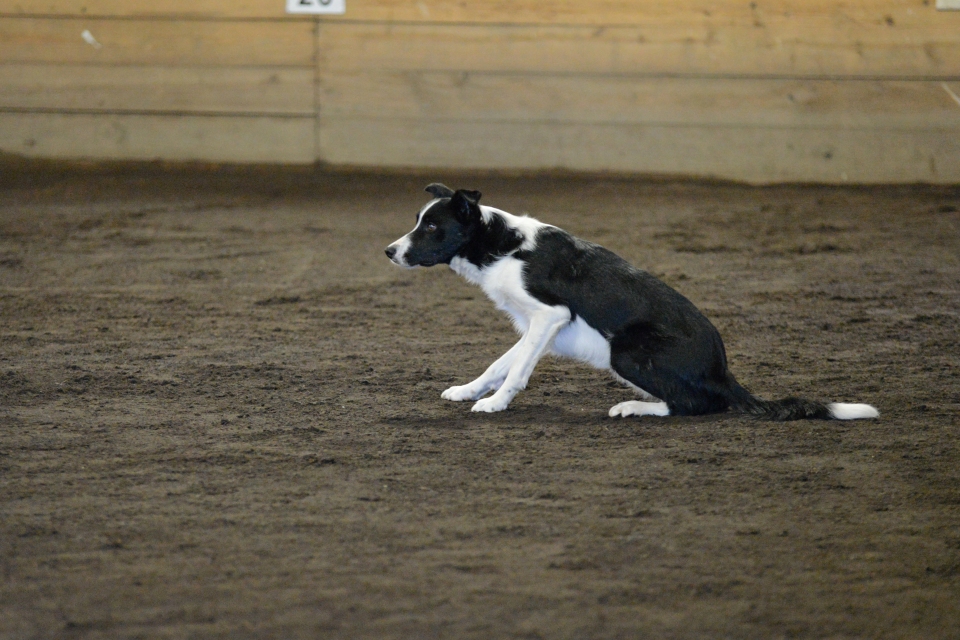 This is Rhys when his brain is fully engaged and functioning. This was not Rhys today.

Doing the Agility Things is hard for Rhys. There are so many things to remember and so many things around and just overall, there are So Many Things. It makes a dog’s head explode.

Rhys is a Thinker. I love that about him. He disguises it though with an exterior of bluff and independence. I’ve found that he really does like playing agility, but it is really hard to concentrate on All the Things going on All the Time and still Do All the Things.

He’s getting better, but it is exhausting.

This is Rhys after agility class and just prior to conking out on the ride home and then conking out once he is home. I feel like I’m making his head explode on a regular basis.

Which is why we’ve been doing a lot of other things lately.

Hiking with my dogs is the best meditation and the thing that balances all of us. 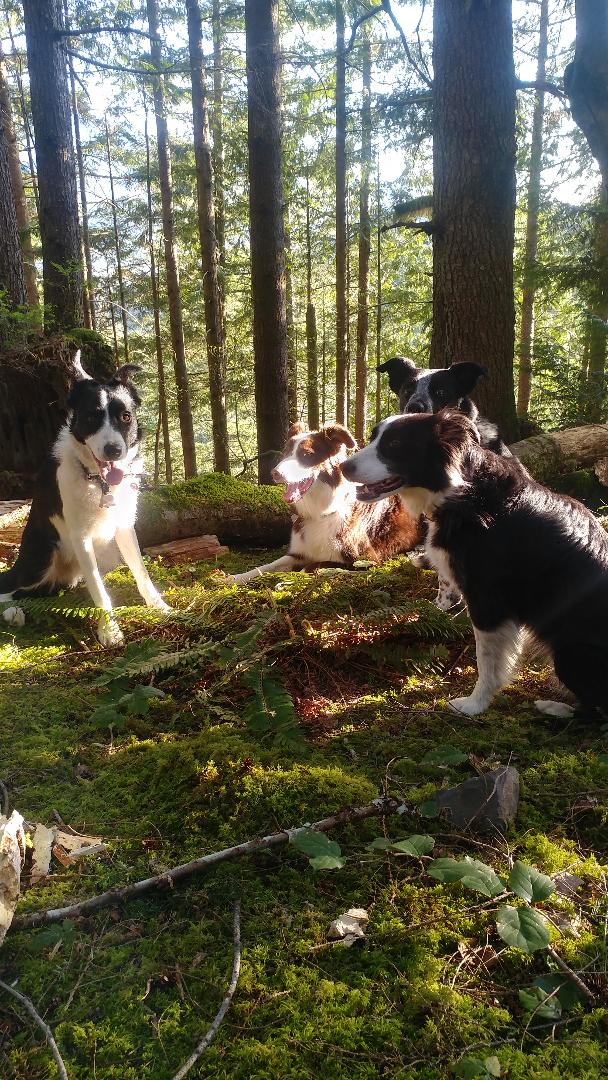 The only rule I have for the dogs is that they need to check in with me and they have to come if I call them. I love watching them be their naturally athletic dog selves and how they use their noses. It is also interesting how they engage with me even when I’m not asking them to. It’s like hiking with four excited little kids who are constantly pointing out things and asking questions, roughhousing, tugging on my hands to see if I saw that thing over there, and then running and skipping just because it feels good. And we all sleep well afterward.

Agility on the other hand is exhausting, but in a completely different way. I think that agility is draining, rather than recharging. Even for Brady who is my one dog that absolutely loves to play agility. They all like it to some extent and it’s a fantastic way to engage them mentally, but I also think it can take a lot out of them.

It certainly took a lot out of Rhys today. He was in the ring maybe for a grand total of 90 seconds and ran around like a chicken with his head cut off for most of it, unable to properly process how to put two obstacles together in a row. The one good thing he did was when I asked him to run the dogwalk and perform his contact criteria. I simply wanted him to be successful, at something. And he was. But asking him to weave in a trial atmosphere is simply not in his wheelhouse right now due to all the other Stuff that is involved, such as strange dogs, strange people, dogs he knows, people he knows, different smells, tents outside, dogs and people walking around the rings, grass instead of dirt …. just so Much Stuff.

The thing that touches me to my soul about this dog is that after a day like this, he wants me, his Human.

Everyone was more than willing to nap when we got home. As usual, Youke hopped on the couch with me, securing his sweet spot nestled up against my side. Brady, who doesn’t typically want to be on the couch with me but who has been more needy of late, put his head on my chest for petting. Rhys had climbed up to the back of the couch, one of his favorite spots. But he looked at me and he looked at Brady. I knew he wanted to climb down and nestle up against me. Rhys tested by extended a paw downward and touching me, while looking at Brady. Brady stared back at him and sneered a bit. But I knew who needed his Human most. I gently pushed Brady off and asked him to lie down. As soon as he did, Rhys slowly lowered himself onto my chest and curled into a tight ball. He let out a huge sigh as he nestled his head under my chin.

This is the dog that does not care to be touched when he is in “work” mode and isn’t really into letting most people pet him.

We napped like that for a couple of hours. Youke adjusted his position a few times, but Rhys didn’t move, other than to let his body relax a bit and expand from a tight little ball to more along the lines of draping my upper body with his body.

Later this week, we’ll go get our zen on.