Rehab. Much as that word just makes me want to channel my inner Amy Winehouse and start singing, rehab is a good thing and this is about Camm.

I have been finding Camm’s rehab a bit frustrating in all honesty. The frustration stems from the fact that I am getting zero to nothing for information.

My regular veterinarian’s office simply said take it slow for a week or so, on-leash walks, then she should be good and bring her back if she was continuing to limp. Granted, the practice sees pet dogs and has no experience with dogs that work or do sports. I highly doubt based upon what I’ve seen that the practice really sees dogs that are all that active.

I received a recommendation from a person whose opinion and experience I trust very much – Mr. Bob with the Magic Hands (or so think Brady and Youke) about taking Camm for underwater treadmill work-outs. Immediately upon her release from the splint/bandage apparatus, I made an appointment with a local clinic that states they do rehabilitation for pets with injuries. The practice even claims to specialize in animal sports medicine.

If the extremely elderly, infirm and/or overweight dogs I’ve seen coming and going do any sports then I must be considered an Olympic medalist, and I’m not.

Still, I took Youke to this clinic several years ago when he suffered from some still-to-date undiagnosed injury that was most likely in my opinion an iliopsoas strain. Four months of natural  herbs, acupuncture and Vitamin B shots and no diagnosis. But since he’d rested all that time, spending months sleeping on my bed, he turned into a flabby, sad dog, concerned that he’d never play Ball again in his entire life. I decided life was too short for a young active dog to be sad and not enjoying life, so we quit with all the smelly natural supplements, said we’d rested enough and started hiking, chasing balls uphill, and eventually started back at agility.

But I’m not a vet, nor am I a dogs sports medicine expert.

Yet I sometimes find myself playing that role when I cannot get answers.

I knew better than to just release Camm and hope for the best. Even if she never does agility again, I want a dog that enjoys hiking with me and is able to clock in some miles. And here’s the thing, if she’s agile enough to go hiking, then wouldn’t she be agile enough to play agility?

In addition to the underwater treadmill, I opted to try laser treatments as well. I’ve never done them. The jury is still out as far as I’m concerned.

I saw an immediate impact from the underwater treadmill after the first time.

In Camm’s case, because she was already so incredibly fit, and surprisingly didn’t lose as much muscle mass in her rear leg as one would’ve though after 12 weeks (ahem …!), regaining muscle in the rear has not been my major concern. I’m very good at helping my dogs to become fit and muscular. Perhaps a little too good, according to Mr. Bob.

My main concern has been her actual foot.

The muscles in the foot atrophied incredibly and her ability to flex the foot and move it properly – like a fit athletic dog in the prime of her life – was severely compromised. That is to be expected since it was immobilized for 12 weeks.

The underwater treadmill has allowed her to start gaining back the flexion in her left rear foot. Until she started getting that back, the movement of the foot itself, and the ability to build muscle again in the foot itself, was compromised.

But Mr. Bob also warned me that the underwater treadmill, if continued for long, can also build muscle very quickly and too much in the rear end, something I don’t want.

I know these things, but I cannot seem to get a straight answer about next steps and what I can be doing from the so-called experts.

Initially I was told rehab would be months and I shouldn’t even expect to bring her back to agility until the spring, if ever. In fact, I was warned to only walk her, slowly, on leash .. for weeks apparently, and to continue the underwater treadmill and laser therapy, at oodles of dollars.

I cornered the rehab vet last week and asked again about next steps. I also discovered that the x-rays I’d had my regular vet send over had never even been looked at. Uh-oh. There also seemed to be confusion among the staff as to whether Camm had surgery or exactly what the nature of her injury was. More uh-oh.

Last week I was told that Camm is looking good and that I should consider ending the underwater treadmill exercise (good, because the package of 10 I purchased ends this week) and that she could probably be doing “regular” stuff soon.

Huh? What happened to next spring and maybe never?

Therefore, Camm is now on my rehab plan.

My rehab plan doesn’t involve inflatable balls to balance on or pills or regimented exercises. My rehab plan entails fields, trails in the woods, hills to climb, lots of interesting things to sniff, fallen trees to jump over and to play king of the mountain on, sometimes a harness to pull against, sometimes a breeze to run into, puddles to walk in, jump in and splash through, and definitely a Ball to chase.

We started my rehab plan late last week with a walk in the woods. This week we’ve already taken two walks in the woods, a romp in a couple of fields, a couple of on-leash walks through local parks on a harness to encourage pulling, and we played Ball a few times. And we did find a few puddles to soak her foot in. Actually it was more like a full body mud treatment, but whatever works, right?

I even took Camm over a jump in the backyard late one day this week, had her do a couple of jump-wraps  and had her do the weave poles once. I never practice agility stuff with my dogs on agility stuff, but that was for me to see if she’d be broken after I did that. She wasn’t.

Camm was a very sweet, and patient, patient for the past three and half months, but the joy on her face I see again when out walking through the woods and being able to play with her sister and brothers is not something I see when she’s doing underwater treadmill or laser therapy. 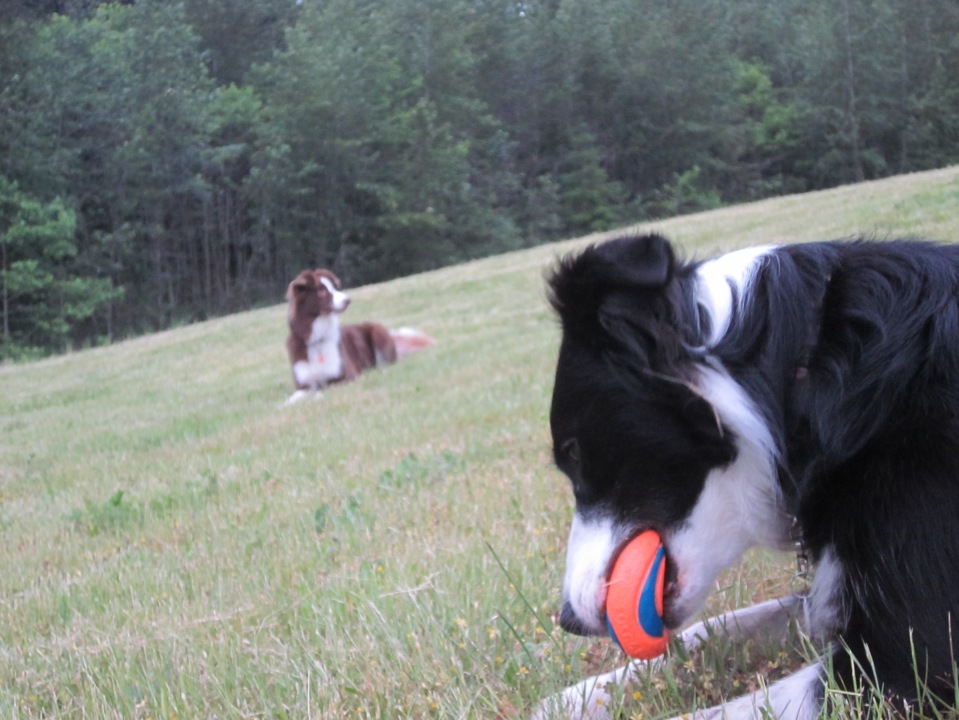