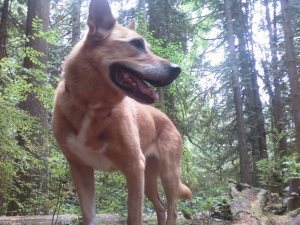 This girl. This girl who today was called “athletic,” “beautiful” and “so well-behaved.” This girl who today I ran errands with and with a leash looped around my wrist while carrying a coffee in the same hand and a shopping bag in the other. This girl who can ignore a snarky little dog trying to get in her face, but that can politely admire the mice with me at the pet store. This girl who can ignore the scores of runners she saw at the park, but that still dropped down into a crouch and waited to pounce on an oncoming dog. Well, no one’s perfect. And the other dog was a border collie. Naughty dogs always recognize each other.

I wrote most of the above earlier today and while contemplating how sometimes perfect Jasmine is. And how often imperfect she is.

While out running errands, I stopped at a Starbucks and grabbed a coffee, then unloaded Jasmine for a walk with me as I picked up a few things,including at the pet store. The leash was in a loose “J” shape, at times nearly dragging on the ground. We passed several people, including some with kids. We negotiated sidewalks, landscaping and parking lots. The entire time, I held my cup of coffee in my right hand, while at the same time the leash was looped around my right wrist. I sipped my coffee as we walked about, including within the pet store. Not a drop was sloshed.

That is a true feat and it’s my utmost personal test for perfect loose leash walking.

Several people smiled and most said a friendly “hello.” It’s funny how that happens when you have the perfect dog walking by your side.

But this is also the dog that still can, and does, drag me like a locomotive. Back in the day, Jasmine used to wear a head halter. I also have several walking harnesses for her that I sometimes still use. And those tools were bought and used after Jasmine had already enrolled and passed three obedience classes.

Jasmine is the dog I absolutely know will behave appropriately and perfectly in a public setting. For instance, in the pet store today, Jasmine and I were in an aisle picking out a chew item for Camm when the snarky little dog emerged from another aisle and made a beeline toward Jasmine’s face, yipping all the time. Jasmine looked at the dog, looked at me, I quietly told her to leave it, but she’d already made up her mind to ignore it. She deliberately turned her head away, then positioned herself to my side and slightly behind me.

The other day we were out and about on a long hike with the other dogs. It was a wonderful day, filled with chasing after critters, lots of sniffing, jumping in mud holes and emerging as expected – covered in mud, playing ball and overall just being dogs, walking along in the woods and scrub with their human. We didn’t see a single soul, until near the end of our venture. A pleasant couple came hiking up the hill we were coming down on. As usual, I saw them well before they realized I was there. I’d already leashed up Jasmine as I didn’t want her rushing up to them and then barking. This tends to scare people. I’d also already tossed the other three their balls to focus on. The couple called out that they had a dog and asked me if I wanted him leashed. I responded that I thought it’d be okay if he stayed free. Truthfully, I didn’t want any of mine surrounding him if he was on leash and with no way to position himself for a proper dog greeting. As expected, Youke, Brady and Camm pretty much ignored the couple and the dog as they had their balls. Instead, they laid on the side of the path, mouthing on their balls. Jasmine had other ideas. She focused immediately on the other dog. He was appropriately and quietly passing by, but Jasmine opted to suddenly and loudly bark right at his face as he started past her. I quickly pulled her away and further down the trail, apologizing for her rudeness.The couple kindly said there was a party pooper in every crowd and we all walked on toward our destinations.

In the scheme of things, what happened was not a big deal. The other dog walked along with his own people just fine. In my own tribe, only Brady momentarily raised his head and stood up to see if he should follow Jasmine’s lead, but then decided to go back to mouthing his ball. But the other three dogs definitely see Jasmine as the ringleader and will react based upon her reactions. Thus the reason why I decided some time ago to redirect focus to their balls.

Because there are times when she is perfection personified, I often have higher expectations for Jasmine. After all, she is the eldest and has had the most formal schooling. Yet, I admit Jasmine’s inconsistency is at times infuriating. Particularly as I have this admittedly flawed assumption that somehow dogs are supposed to be better as they get older and become mellower. That seems to happen to other people’s dogs. I think it happened with my own first two dogs as an adult, despite the lack of any formal training or obedience. But Jasmine marches to a different drummer.

Today, I could drink a cup of coffee with my perfect dog walking by my side. Yesterday, she ferociously barked at a cyclist who dared to approach me and ask a question. Later today? Tomorrow? Next week? I guess ultimately I don’t care, as long as she’s there by my side.

← On Leash and No One Died
Therapy Session →