Tunnelers Makes It All Better

My usual levelheadedness failed me and I was feeling frustrated yesterday at an agility trial. Until tunnelers that is. 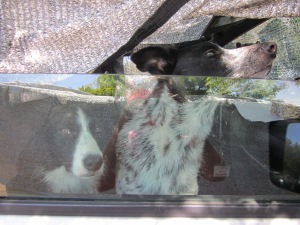 Camm and Youke want to know when they can get out and play.

Tunnelers is a fun and fast game in one of the agility venues I play in, NADAC. The course consists entirely of tunnels. The course is set up in any number of configurations and like any agility obstacle course, the handler has to direct their dog through it. Hopefully in the manner as numbered.

My love of tunnelers is contagious. I’m convinced that because I like it so much, my dogs do too. Dogs pick up on their humans’ feelings about things. Since running tunnelers makes me happy, my dogs are pretty happy about it too. However, I have to admit, I could never convince Jasmine of how fun it is. My theory is that all those tunnels concerned and frustrated Jasmine. Pretty much any course that consisted of almost all the same obstacles was cause for concern with Jasmine. Since she hates to be wrong about things, I think that maybe she though she was being sent over and over again to the same things because she’d done it wrong in the prior sequence.

The first time I met Youke as a wee pup, he impressed me by running through a tunnel. He did it all on his own, no direction from a human and clearly thought it was the best thing ever. I knew then that I had a tunnelers dog. Was I ever right. Youke has a gazillion qualifying scores in tunnelers. He and I are so good at tunnelers that he pretty much has to be dead-tired not to qualify. I can count on one hand the number of times per year that Youke does not qualify in tunnelers.

Sometimes tunnelers is so fun for Brady that he drools. In Camm’s case, I know she found a particular course incredibly super exhilarating when she comes out of the last tunnel with her teeth chattering and a blaze in her eyes.

The last agility trial where I had a serious crisis of confidence, aka I was near tears, was a few years ago in Canada, and Youke and I did not qualify in tunnelers.

I had taken Youke up for a NADAC trial, just he and I. We had a terrible weekend. We just were not in synch at all and things did not go well. It was not even a fact of having no qualifying scores as by then I had learned it was not all about getting Qs. It was that we were not meshing as a team at all. Plus my handling sucked. Another woman, who was experiencing an equally frustrating weekend, lightened the situation some by declaring that she and I were in a quest for a zero qualifying weekend. Guess who won? Me. At least she and her dog qualified in tunnelers in the last run of the day.

Just prior to the tunnelers run that particular weekend, I sat in my car with Youke in the passenger seat beside me. I was at my lowest point of the weekend. I wanted to cry. And I really wanted to just pack up my stuff and leave early and go home. I didn’t do either. Instead, I reminded myself that my days of crying about something as stupid as getting Qs or not in a game I’m playing with my dog that is supposed to be fun were over and had been over for almost a year at that point. I reminded myself that I was at a beautiful place that I loved to visit, was surrounded by wonderful people and was doing something with one of my best friends that he and I really liked to do. I glanced down at Youke, curled up sleeping on the seat and rallied myself, telling myself I owed it to him to not break down about something so unimportant..I also reminded myself that tunnelers was coming up and we almost always scored in that, so all was not lost. And yes, I do have a lot of conversations with myself.

But Youke took an off course tunnel and we did not qualify, meaning we didn’t get a single qualifying run the entire weekend, including on Friday night.

However, my mood had shifted and despite the admittedly disappointing showing, I realized I’d still enjoyed a mini-weekend vacation on Vancouver Island, had visited with folks I enjoyed being with, had played and explored on the beach numerous times with Youke – something we both adore – and had visited a couple of new places on the island we had previously not been to before. Plus I could now brag about having a weekend with nothing but zeroes.

As I recall, the next trial I did with Youke several weeks later was grand, with almost all qualifying scores, including, of course, in tunnelers.

This past weekend was, as with every agility trial I attend pretty much it seems, a roller coaster of highs and lows. I didn’t let anything that happened Saturday, good or bad, really get to me, merely noting the bad things as things to work on with my dogs in training practices and taking pleasure in the good moments. Brady had a scoreless Saturday, but I noted the great things that occurred on runs and filed away the things I needed to work on. Camm and I had rough patches in the first two runs, but both jumpers runs were nice and the second was particularly lovely and smooth.

On Sunday though, my usual ability to hold a pretty even keel was tested. Maybe it’s that there were a couple of runs that I badly wanted qualifying scores.

However, I didn’t properly walk one course and directed Brady, very efficiently I might add, on the second run but over the wrong course. Se la vie. He did exactly what I asked. I couldn’t be upset about that. When someone told me, I just shrugged, figuring there will always be more opportunities.

I also wanted to redeem a run I’d had with Youke a few weeks ago. This past weekend, we ran the same courses we’d run in Newport Beach. That weekend, I had a perfect run with Youke in a distance game called chances, but had stepped over the distance line inadvertently, disqualifying the run. A qualifying run this past weekend was not meant to be though.

Both boys ran the regular courses fairly smoothly, in fact each had a great run in the first round and I felt competent and smooth as their handler, but the second runs each contained one particularly frustrating bobble that I couldn’t seem to not focus upon.

Then came Camm’s turn. Each of her regular runs started off gorgeously. Midway through though, we had a handler/dog bobble.Round one was my fault, leading to frustration from her, which – like Brady – quickly translates to attempted nipping. I walked her off course. I do not like getting mouthed on the boob. Midway through round two, which had been going well until she self-released immediately from a contact, she flew at me, attempting to nip again. I quickly told her to lie down and that time carried her off the agility field. Camm finds that particularly humiliating. My left boob thanked me profusely and was glad right boob had taken one for the team in the previous round.

For the first time in a long time, I sat for a moment in my vehicle wondering what I was doing. In that moment, I was not having fun. I thoroughly buy into the concept that agility should be fun for the dog, more so perhaps than the human, But the human still has to have fun. It’s impossible to fake it with dogs. If you’re not having fun, the dog isn’t either.

Both Camm and Brady were curled up in the back of the jeep. tired and a bit puzzled. I could feel their own frustration and perhaps even disappointment with me. Youke, who has been through this before, sat in the passenger seat, nose pushing at me to pet him. As I absent-mindedly stroked him, I thought to myself that I should just pack it up and leave for the day. There’s a mantra in training dogs that if you’re not into it or cannot be clear-headed about it, you need to immediately stop and take it back up later, when you can be.

All I could think of though was how I’d entered all three dogs in two rounds of tunnelers – six runs- and that seemed like a lot of entry fee money to simply throw away. I decided to stay. Money can be a motivating factor at times.

Youke continued to push at me with his nose, forcing me to place my attention on him.

As I thought through it more, I also reminded myself that tunnelers is fun and that my dogs love it. It might even prove to be a stress reliever for us all. So I chose to stay, shook off the glumness and stopped  thinking about how late the day was getting and how it’d be nice to get home,

The first step was to re-set our collective mindsets. So I took all three dogs out for a brief little walk, a visit to the kiddie pools to cool off and ample time to sniff, pee on things and roll in the grass. Of course, I didn’t get to wallow in the kiddie pool, I’m not really into sniffing and peeing on things and it’s a little uncouth for me to be rolling in the grass at my age, but nonetheless, that little jaunt also helped to re-set my mind too.

And tunnelers was super fun, like it almost always is.

I realized after I had played our last game of ball in the big field and was packing up stuff to head home that I’d completely forgotten about the earlier frustration and unhappiness of the day. I had three dogs with loose relaxed bodies and wide panting smiles on their faces flopped in the back of the jeep and ready to head home. It ended up being a good day after all. 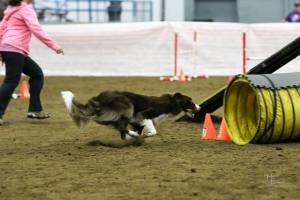 Brady demonstrates how fast and fun flying into tunnels can be. Photo by Heidi Erland.

← Why Border Collies Are Easy
Come As You Are →